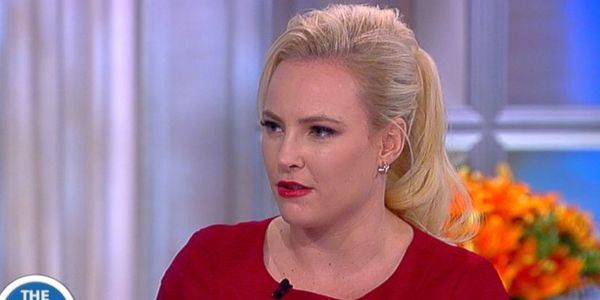 WE, the following petition signers, loyal fans of THE VIEW, have now taken to social media for our voice and ‘VIEW’ to be heard. Since new co-host Megan McCain has taken a seat on THE VIEW, the show has taken a turn for the worse. McCain, from the very beginning, has been captivating the masses with the shows tenebrous footage of her public outbursts that have followed her around like a shadow craving to come out and play as she’s tried, unsuccessfully I might add, to intoxicate the audience to join in with her. It’s as though THE VIEW has become McCain’s personal I V of sorts, drippin’ her version of truth into anyone who will listen even at the expense of chopping the tongue off her co-host sisters just so she can be heard, which has become a daily ritual.

She has literally become the shows ‘loaded gun of politically charged we all have had enough’ and it appears the only fire she seems to be fueling these days is that of your loyal supporters who watch THE VIEW. McCain has become her own guilty pleasure, quintessential gut ripper that suckles on the audience’s breasts of one’s life essence all entwined in her own secret fantasy of I’m right, you’re wrong. It's become a Megan McCain day care show with the other co hosts trying to control Megan McCain's temper and self righteous attitude. She’s become the shows cryptic hummer sending your audience quivering in anticipation on when the next bomb is going to rip across our TV screens with her annoying voice that echo’s through one’s core long after her tirade has faded so you can get on with the rest of the show and not have to deal with all her negative energy.

Having a 'voice' on THE VIEW, comes with a responsibility. Your audience looks for words of comfort in times of great challenge. The show has become a bed of mag-splash roses, bon appetite style, sure to leave anyone’s mouth salivating for more bon vivant with the many topics THE VIEW covers; not to mention the amazing women (and men) who sit at that table who inspire. McCain is not a fit. This show has a gift of strong sincerity. One that breaks you down to your core, and brings you back to what's real, to what matters, to what's important. On the other end of the spectrum, then spiritually embraces your insides like an angel who has wrapped you up in their healing wings after a hard days night on a cathartic journey when the debate is heads on, done with respect and compassion.

AS much as we can all appreciate her opinions, there is a time and place for everything, and using a velvet hammer is not one of McCain’s strong points. Megan McCain's negative attitude really has changed the heartbeat of this show and what it stands for. As much as I love a good debate, nothing good comes out of a train wreck that leaves one feeling as if they can’t look away from sheer shock. Or, if feel if they have got hit in the gut by someone who has to challenge everything everyone is saying. It’s exhausting watching McCain do just that. I don't know about the producers or the sponsors, but I have been personally following the threads to see how others feel about McCain on the show to make sure it was not just me, and the out pour of people watching THE VIEW and their comments on how strongly they feel about new co host McCain is a sure sign it's become just too hard to watch these days.

On todays show (1.22.18) with guest co-host Ana Navarro, which finally inspired me to put this petition together, was the first time I saw Whoopi Goldberg literally lose her temper, or try to control her temper where McCain was concerned, to the point she had to shut her down, go to commercial break and regroup. Now, I am not a weather reporting wiretap, but I do have a background in radio (on air, sales, producing,) cable (live on air host and producer) and news, and what I can't understand is this... do you have McCain on the show to raise the blood pressure of your audience so your ratings stay high (like a train wreck one can't look away from,) or do you have her on for her conservative political view points to balance out the show regardless of how your audience feels? If so, there are many other qualified women who can do a much better job than McCain, with still the same fire in their belly, but with respect. It's quite disturbing. I have seen her on other news shows as well as of late, and she brings with her a black cloud whatever show she is on.

I am sure I can speak for the many who agree with me. WE hope you take what I have shared in consideration because we are the one's that watch the show. It's already politically devastating with what is going on in this world at large, without having to turn on to THE VIEW and get the same mouthful of disrespectful from someone who has the need to be right at all times, who carries with them a political disruptive force that is a sound board for the show.

So we implore you to consider removing her from this show and replacing her with someone who is more fitting for your audience. There are numerous comments on how your audience feels. May I invite you to please read through these threads on what everyone is saying. We are the ones who keep the sponsors in business and support this show. We LOVE THE VIEW and what this show stands for. So plaese show us, your audience the same respect and her our View. Thank you.
Sign Petition
SHAREShare this petition with friends!TWEETEMAILEMBED
Sign Petition
See more petitions:
You have JavaScript disabled. Without it, our site might not function properly.