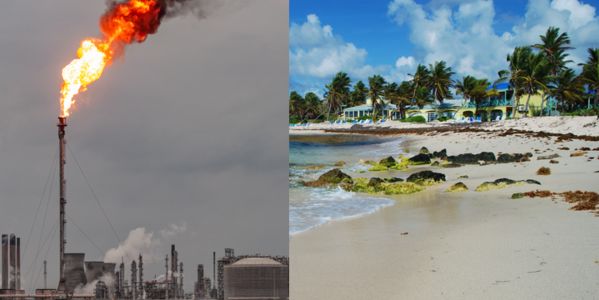 An oil refinery rained petroleum on wildlife, people, and homes. Shut down this foul plant, now!

For almost 10 years, a huge oil refinery lay dormant on St. Croix in the U.S. Virgin Islands — as it should have. After committing dangerous environmental breaches, Limetree Bay Refining was beset with lawsuit after lawsuit after lawsuit for their misdeeds, until the plant finally shut down.

Until, of course, Donald Trump chose to reopen it because — why not? Since when has he cared about poisoning people living next to an oil refinery?

Trump's plan to reopen the facility went into action during the end of his term in office, with the plant finally opening on February 4, 2021. Three days later, horror ensued.

Tell the Biden administration to shut down this oil refinery once and for all! With a legacy of serious ecological violations, it cannot be trusted to keep the people or animals around it safe.

On February 7th, the sky rained oil. It started as a vapor cloud released by the recently re-operated Limetree Bay refinery, and wafted up into the air. Then, it glided over from the plant onto the nearby community of Clifton Hill, filled with homes and gardens and children's toys. But it didn't continue to hover much longer.

Shortly after 2am, the vapor — a mix of petroleum and water — burst. And it rained down on everything below, covering cars, toys, pets' water bowls, and more in oil. Now, two months later, the oil remains. Residents say it's still stuck to their avocado and fruit trees, and can't be washed out.

As an island, St. Croix is surrounded by rich, abundant marine animal life, including turtles, sharks, whales, and coral reefs. Each and every one of these ocean beings is threatened by the Limetree Bay Refining plant — both by what it's done in the past, and by what it's spewing right now. This oil could slowly seep into the water supply of both humans and wild animals alike — poisoning all creatures for a long time to come.

This is also a massive humans rights issue. On top of the obvious problem that no person should be poisoned with oil, St. Croix is an island with a highly disenfranchised population. The vast majority of residents are Black, the descendents of enslaved Africans brought to work on sugar and cotton plantations. For generations, the U.S. government has cared little about the well-being of people there.

Luckily, the Biden administration acted quickly, and has already begun an investigation and revoked several permits. But that's clearly not enough, because the plant is still open. Even worse, the pollution from this foul facility still remains in the water and in the soil.

President Joe Biden must show bold leadership and shut down the untrustworthy Limetree Bay Refining facility now, and commit to cleaning up its nasty pollution in order to save the animals and St. Croix's human inhabitants. Sign the petition now!
Sign Petition
SHAREShare With FriendsTWEETEMAILEMBED
Sign Petition
See more petitions:
You have JavaScript disabled. Without it, our site might not function properly.