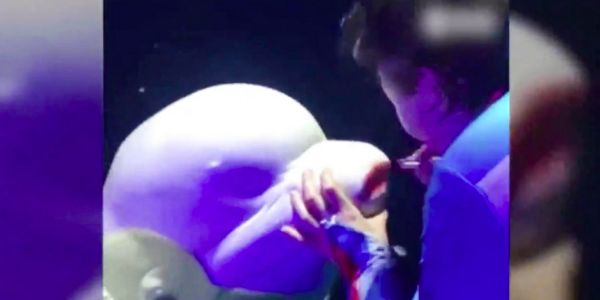 Why Did This Animal Trainer Put Lipstick on a Whale?

"Is it safe to put lipstick on a whale?"

No matter how strange the question seems, the sad reality is that animal-loving netizens had to ask themselves that very question after video recently surfaced showing a marine park worker slathering red lipstick on a beluga whale to make her "prettier" for paying guests.

The park, Sun Asia Ocean World in Dalian, China, seems to train its employees to do anything to their animals for the benefit of their customers. Even if it means forcing them to behave in unnatural ways or smearing them with ridiculous cosmetics that could cause them harm.

After online outrage, the park publicly apologized and the trainer resigned but that is not necessarily a victory, nor does it help the beluga whales still held in captivity at Sun Asia Ocean World.

In the wild, belugas can live to be 60. But just like other animals like elephants, in captivity, they will likely live a fraction of that. According to experts, belugas in captivity live just 20-25 years. Additionally, because they don't reproduce well in marine parks, these facilities resort to stealing whales from the wild when one of their whales die.

Marine parks like Sun Asia believe a quick buck is worth the early death of their star animals.

These types of parks should no longer exist. They are cruel and put these highly intelligent and social creatures at risk every day they are locked within the walls of their plexiglass tank.

Please join Care2 and ask the the city of Dalian, to ban the captivity of marine mammals. Sign now.
Sign Petition
SHAREShare this petition with friends!TWEETEMAILEMBED
Sign Petition
See more petitions:
You have JavaScript disabled. Without it, our site might not function properly.

Care2
Why Did This Animal Trainer Put Lipstick on a Whale?
SHARETWEET