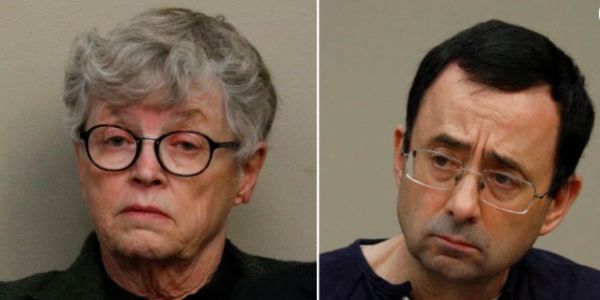 Larry Nassar was a doctor at MSU and used to be on the medical team for USA gymnastics. But as it turns out, he had been using that power to sexually abuse the girls in his care for 30 years.

Even more horrifying? Some of his victims were expected to foot the bill for visits where they were assaulted or raped until the public demanded change.  In addition to this gross injustice, many of Nassar's enablers are still employed. Michigan State University president Lou Anna Simon resigned after pressure from this petition and other public outcry. But she will continue to receive her $750,000 salary and have a job at the university, along with a bizarre assortment of sports related perks. Suspicious.

Nassar was first accused in 1997, yet was employeed for another 20 years.

Sign the petition to force all MSU employees who knew about the abuse for varying lengths of time and didn't act out of their positions.

Nassar abused at least 150 young girls over three decades. During his trial, Nassar had the nerve to ask not to hear his victims' impact speeches because it was "too painful" for him. Thankfully, the judge not only denied his request, but allowed any of his victims to speak for as long as they liked. He has finally been sentenced to life in prison.

Now it's time to figure out who knew about the years of sexual abuse and oust anyone who didn't act.

On Monday, Jan 22, one of his 15-year-old victims told the court that she is still receiving bills for visits in which she was sexually abused. This is absurd. After this petition and other people called attention to this, the university officially forgave all medical bills for victims.

Please sign on to demand that all Nassar's enablers are all fired and a full investigation is launched into how such rampant abuse could go on.

After years of people in power ignoring survivor's coming forward or trying to convince them they didn't understand their own experience, it's time the community demands change. Like Ally Raisman says in her powerful testimony "It's clear that if we leave it up to these organizaitons, history is likely to repeat itself."
Sign Petition
SHAREShare With FriendsTWEETEMAILEMBED
Sign Petition
See more petitions:
You have JavaScript disabled. Without it, our site might not function properly.