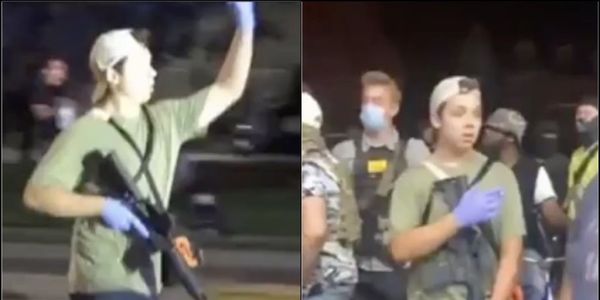 The police shooting of Jacob Blake in front of his own children has the state of Wisconsin and the entire nation reeling. Each night since, civilians have gathered in Kenosha, Wisconsin to protest these relentless and unabated state-sponsored attacks on unarmed Black Americans. But now, a white vigilante and mass shooter has added two more state-sanctioned murders to the horrifically ever-growing list.

Sign the petition to demand that officials charge this mass-shooter with hate crimes, and prosecute to the full extent of the law! All police officers who were silent accomplices must also be fired, now!

On Tuesday, August 25th, as unarmed protesters were walking through the streets of Kenosha, a group of approximately 15 or so white militia members carrying weapons that included AK-47s assembled at a gas station nearby, saying they were there to "protect it." Video evidence from that night shows police officers thanking the armed vigilantes — including the future shooter — for being present, and offering them water and assistance.

Shortly thereafter, one of the white police sympathizers, since identified as Kyle Rittenhouse, hoisted his AK-47. The details are still coming to light, but gunshots left the crowd of unarmed protestors scattered and running, among them the gunman. Someone's video captured a bystander asking, "What did he do?" Another person responded that the militia member shot someone. The video then showed the vigilante turn to the crowd. Then, in a flash, Rittenhouse opened fire on the whole unarmed group of people, shooting multiple rounds of bullets, killing two people and injuring a third. One man he shot point-blank in the head. Video shows the protester's blood running down the back of his head and neck.

This mass-shooter should clearly have instantly been behind bars. And yet he wasn't. After he was done with his murder spree, more videos show him walking calmly and directly towards the police, and the authorities just let him pass. In fact, they even let him leave the state and go back to his home of Illinois.

Think of all the unarmed, nonviolent Black men who will never return home because they were perceived as a threat by police. Why was Kyle Rittenhouse, a violent murderer, afforded such a luxury? If this murderer had been Black, there's no doubt police would have treated this atrocity in a dramatically different way. But because he was white and a pro-police militia member, he remained at-large and unapprehended for a full day. Only after intense public pressure did authorities in Kenosha, Wisconsin choose to identify and arrest Rittenhouse for his heinous crime and charge him with first-degree intentional homicide.

Now, however, we need to keep the pressure up. To get the public off their cause, officials frequently charge individuals in high-profile cases, and then later drop all charges when no one's watching. We need to make sure that doesn't happen in this case. Kyle Rittenhouse must be fully prosecuted as the vigilante murderer that he is.

Sign the petition to show Wisconsin officials you are watching! Demand that they fire all cops who looked the other way and let this murderer go. They must also prosecute this mass-shooter and charge him with committing hate crimes!
Sign Petition
SHAREShare this petition with friends!TWEETEMAILEMBED
Sign Petition
See more petitions:
You have JavaScript disabled. Without it, our site might not function properly.