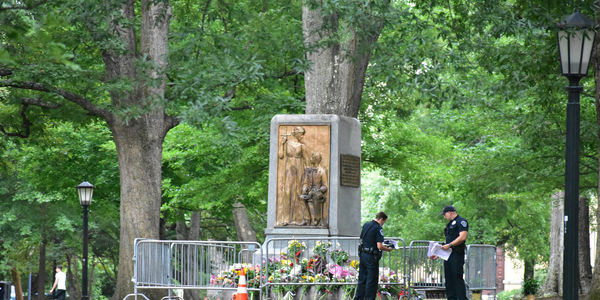 Confederate Statue 'Silent Sam' Has No Place on Campus

The University of North Carolina, Chapel Hill's trustees have proposed building a $5.3 million facility to house the "Silent Sam" Confederate memorial that was torn down over the summer. When anti-racist activists toppled this statue, they joined protesters and organizations across the United States taking down monuments, renaming buildings, and working together to heal the scars left by the legacy of slavery in the United States.

Changing the name of the building or taking a statue down can't magically fix history, but it can help communities focus on how they want to move forward toward racial justice. At UNC Chapel Hill, students and organizers felt removing the statue would make campus more welcoming for members of the Black community, making it clear that the university doesn't celebrate a legacy of slavery and the people who defended it.

This proposal would roll back the clock, relocating the statue to a special facility that would cost $800,000 to operate. Supposedly, the structure is necessary for "public safety," with the university fearing that if the state is installed outdoors, it may be removed or damaged again by protesters. If they're that concerned, it's probably a sign: Silent Sam doesn't belong on campus.

But a 2015 state law complicates matters. The university can't put the statue in storage or move it off-site without an act of the legislature.

And that's what UNC Chapel Hill should ask for if it's serious about confronting the legacy of Silent Sam, learning from it, and moving forward. Wasting millions of dollars on a shrine to a racist statue is a horrendous slap in the face to organizers who worked so hard to #SilenceSam and build a more inclusive campus. Letting the statue go into storage like other historical items plagued with racist legacies that make them inappropriate to publicly display without contextual discussion would be the most appropriate way to resolve this situation—and ultimately, so would pushing to reform the law so institutions and communities can make their own choices about whether they wish to continue displaying Confederate monuments.

UNC's Board of Governors will be meeting on December 14th to make a final decision about this proposal. Tell them not to agree to this costly, insulting proposal: It's time to kick Silent Sam off-campus for good.