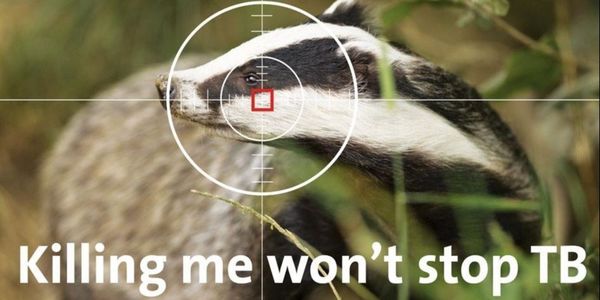 Care2 says: 35,000 badgers were killed in 2019's UK badger cull, a record number since the cull was started in 2013 to fight bovine-TB, of which badgers are vectors. The policy has since been discredited due to a lack of evidence that culling badgers actually reduces instances of bovine-TB. Scientists oppose the cull, saying it is unscientific. Tell the Government to stop killing badgers.

The largest-ever study conducted to examine whether culling badgers would reduce TB bovine in cattle, a ten-year, £50m study called the Randomised Badger Culling Trial, concluded in 2007 that: "… badger culling can make no meaningful contribution to cattle TB control in Britain."

The scientists who oversaw that study also stated: "It is unfortunate that agricultural and veterinary leaders continue to believe, in spite of overwhelming scientific evidence to the contrary, that the main approach to cattle TB control must involve some form of badger population control."

In 2012, Lord Krebs, a key scientist involved in the RBCT study, called the government's cull policy "mindless", adding: "The scientific case is as clear as it can be: This cull is not the answer to TB in cattle. The government is cherry-picking bits of data to support its case."

A letter signed by 31 eminent scientists in October 2012 described the cull as a "costly distraction" and stated, "As scientists with expertise in managing wildlife and wildlife diseases, we believe the complexities of TB transmission mean that licensed culling risks increasing cattle TB rather than reducing it."

In 2015, a group of scientists and wildlife experts wrote an open letter calling on the government to "reconsider, immediately, the decision to continue and extend the culling of badgers."

The 2013 culls were damned as both "inhumane" and "ineffective" by the government-appointed Independent Expert Panel.

The IEP report stated: "It is extremely likely that between 7.4 per cent and 22.8 per cent of badgers that were shot at were still alive after 5 minutes, and therefore at risk of experiencing marked pain. We are concerned at the potential for suffering that these figures imply."

The IEP used data showing the accuracy of shooting to assess the humaneness of the cull. The data shows that this figure has not improved during the 2014 or 2015 culls, and that the culls continue to be "inhumane."

Badgers are killed by two methods: by "cage trapping and shooting," where they are caught in cage traps and then shot at close range; or by "controlled" shooting, where a cull company contractor shoots them with a rifle in the countryside at night.

In April 2015, the British Veterinary Association, concerned at the level of humaneness, withdrew its support for the use of "controlled" shooting. It stated: "BVA believes that it has not been demonstrated conclusively that controlled shooting can be carried out effectively and humanely based on the criteria that were set for the pilots. Nor are we confident that the effectiveness and humaneness can be significantly further improved, despite Defra's assurances after the first year of culling. We therefore do not support the continued use of controlled shooting as part of the badger control policy."

Natural England estimated that between 2,300 and 3,300 animals would be killed in each cull zone over a full four-year culling period. If the culling policy is rolled out to its full extent, up to 130,000 badgers could be killed.

There has been no routine testing of badgers killed during culling to establish whether they carried bovine TB. Data from the Randomised Badger Culling Trial showed that even in bovine TB hotspots only around 15 per cent of badgers carried the infection and, of a large sample tested during the Trial, only about 1 per cent showed extensive, severe, signs of disease and were therefore likely to be a risk to cattle or other animals.

Farmers and the public have been falsely presented with the impression that without the large-scale killing of badgers, bovine tuberculosis in cattle cannot be effectively controlled.

However, this is not the view of scientists involved in the ten-year RBCT study. The final report from the RBCT clearly states: "Weaknesses in cattle testing regimes mean that cattle themselves contribute significantly to the persistence and spread of disease in all areas where TB occurs, and in some parts of Britain are likely to be the main source of infection." It continues, "Scientific findings indicate that the rising incidence of disease can be reversed, and geographical spread contained, by the rigid application of cattle-based control measures alone."

In Wales, where stricter cattle testing and movement restrictions have been implemented in recent years (and where badger vaccination is undertaken and there is no badger culling), the number of cattle slaughtered as a result of bovine TB was reduced from 11,671 in 2009, to 6,379 in 2014, or some 45 per cent.