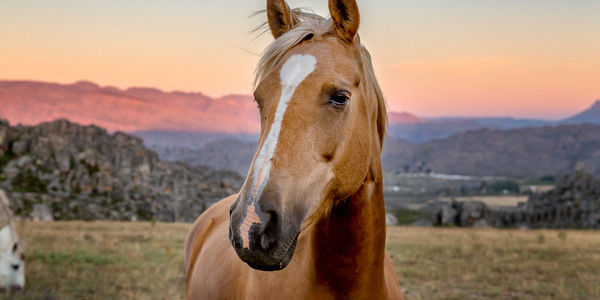 Sterilizing wild horses could save them from the warehouses... and from slaughter

For years, the U.S. federal government has been inflicting trauma and pain on countless horses — simply because they are wild and free.

But now, some of that suffering could be avoided if Congress includes horse-friendly language, recently introduced to the House by several Democratic members of Congress, on the next Appropriations bill.

Sign the petition to demand that Congress do right by wild horses and end the government's reign of terror over these free animals!

Under Donald Trump, the federal Bureau of Land Management announced that it planned to forcibly round up and "remove" upwards of 90,000 wild burros and horses, just for existing on public lands. This wasn't an entirely new idea — each year, the bureau charges taxpayers approximately $60 million to round up and shove these animals into warehouse-style "holding facilities" for indefinitely long periods of time.

To begin this journey, each summer the bureau conducts its yearly roundup-via-helicopter, in which terrifyingly loud and powerful airborne vessels lunge at the panicked horses out of the sky, cowing them into chaotic frenzy and ultimately, submission. Then, they are crammed into their semi-permanent holding pens. With nowhere to go, no possibility of roaming free, and after enduring a mercilessly cold corralling process, these animals often sustained serious injuries and illness — sometimes leading to death.

To make matters worse though, sometimes the journey doesn't end there. A New York Times investigation discovered that horses are routinely "adopted" out to seedy individuals... who turn out to be meat purchasers for slaughterhouse operations. In other words: rounded-up horses, terrified, traumatized, and deprived of their freedom, are then sometimes sold off to become dinner meat on someone's table.

Something clearly needs to change. That's why it's such a relief to know that more than 40 members of Congress are determined to end this brutal removal process and replace it with a more humane sterilization policy. Like spaying-and-releasing cats or dogs, this new rule could save countless lives now, while reducing the overcrowding issue of too many wild horses in the future.

Care2
Sterilizing wild horses could save them from the warehouses... and from slaughter
TEILENTWEET