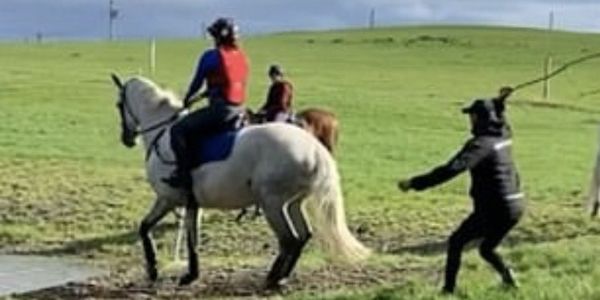 An Olympic Gold Medallist Was Caught Beating a Horse. This Must Be Investigated, Now!

In mid-February, a man who earned international fame for his horse-riding and horse-training skills was caught beating a horse because it disobeyed him. Sir Mark Todd was a professional equestrian rider for upwards of 20 years, earning two Olympic gold medals.

Even now, several years into his retirement from riding, horses remain a key part of his life. In fact, he's now a trainer. He and his wife breed horses, and he owns a fancy training facility in the UK.

But apparently, treating horses well isn't part of the equation.

Sign the petition to demand authorities investigate this incident! They must also ensure that all horses trained at Sir Mark's facilities are safe and well-treated.

Video evidence shows a man who appears to be Sir Mark using a branch to repeatedly whip a horse when it refused to cross water in its path. (Sir Mark has since confirmed the video was of him.) In the footage, he seems to be experiencing a fit of rage at the animal's defiance and, presumably, thought violence would be the answer to getting what he wanted.

Meanwhile, the poor creature jitters and shakes as it tries to avoid the lashings from Sir Mark.

If a professional equestrian such as Sir Mark Todd is caught abusing a horse even just one time, how can we be certain there haven't also been other instances of abuse? He's had decades of access to these animals, and certainly would have experienced other moments when horses wouldn't do what he wanted. Has he taken out his anger and frustration on them like this before?

Already, the British Horseracing Authority has banned Sir Mark from racing horses, but we still haven't sufficiently ascertained the well-being of the creatures around him.

Care2
An Olympic Gold Medallist Was Caught Beating a Horse. This Must Be Investigated, Now!
TEILENTWEET