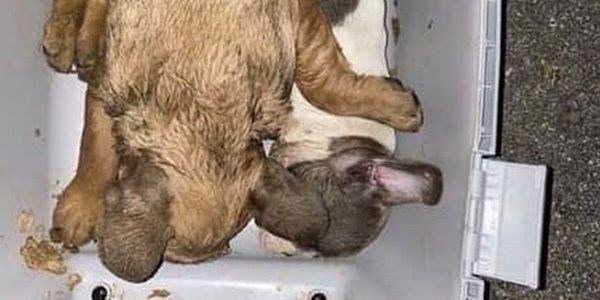 Due to the rapid global spread of the coronavirus, most of us are staying on the ground and taking a break from air travel until a vaccine can be found. But for a poor group of puppies from Ukraine, they had no choice in the matter. When their cruel handlers loaded 500 of the tiny dogs into the cargo hold of a flight bound for Toronto, they must have known that the journey would be a nightmare. But the full gravity of the situation came into light when the flight landed and 38 of the puppies were found dead, and hundreds more were sick, dehydrated, and on the brink of death themselves.

This should never have been allowed to happen. Sign the petition if you want to demand that the State Aviation Administration of Ukraine launch a full investigation into Ukranian National Airlines, the company that allowed 500 puppies to suffer and die for no good reason!

The pictures, captured by an animal lover who happened to be at the Toronto Pearson Airport picking up an animal of her own, are horrible. Crates filled with limp puppies, covered in their own feces and urine, can be seen stacked haphazardly. Dead puppies were thrown away in garbage cans like they were nothing more than trash. The witness described it as a "horror show." The puppies had just endured torturous temperatures, had no access to water, and were so young that they simply couldn't survive without their mothers. But why were they there?

The puppies were all french bulldogs, a designer breed that is notorious for being bred, transported, and sold illegally to fulfill soaring demand for the highly Instagrammable dogs. Because they are being sold strictly for profit, these animals are never treated well. They are kept in cramped and unsanitary conditions, bred dangerously so that they are guaranteed health issues, and never provided proper attention or vet care.

It is believed that the flight itself could have been chartered by one of the many puppy mill operations in Eastern Europe in an effort to smuggle dogs that were bred and raised in horrifically unsanitary conditions to prospective buyers in western countries. Most airlines have a limit as low as two animals in the cargo hold per flight, and often there are month restrictions so that animals do not cook during the hot summer months. So how in the world did 500 defenseless puppies end up in a cargo hold together in the middle of June?

The illegal puppy trade is a global problem --  our demand for cute, "purebred," dogs is driving these dangerous methods of supply. But as long as these breeders and smugglers are able to get these dogs to market, the chain will continue unbroken.

This tragic incident on a Ukraine National Airlines flight serves to highlight the torture and misery that dogs on the black market go through daily. By sending a strong message to this airline that this kind of abuse will not be tolerated, we can take a crucial step to ending animal suffering everywhere.

Please sign the petition and urge the State Aviation Administration of Ukraine to investigate how and why Ukraine National Airlines took part in this mass torture and murder of puppies!