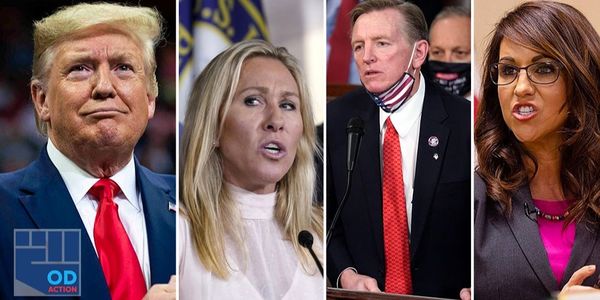 Ban insurrectionists from running for public office, including Trump!

It's officially been a year since the fatal attack at the US Capitol, initiated by the followers of disgraced ex-President Trump. Progressives across the country are ramping up the fight to block January 6th insurrectionists from running for office ever again – including Trump and hundreds of Republican elected officials like Marjorie Taylor Greene, Lauren Boebart, and Paul Gosar.

Technically, the group should already be ineligible. Following the Civil War, an amendment was enacted that disqualifies any individual who has taken an oath to uphold the US Constitution, that partakes in any way with an insurrection or rebellion against the US, from holding public office. By inciting and engaging in the violent attacks on the US Capitol, all of the insurrectionists have deemed themselves unfit for government.

Add your name to demand election officers ensure current and former officials that participated in January 6th do not appear on any future ballot!

More than 1,000 public officials, including 213 elected officials, were identified as accomplices in Trump's effort to prevent the certification of Biden's electoral victory. Within the context of our Constitution, these insurrectionists have more than proven themselves unsuitable for their positions. Even outside of January 6th, many of these members have shown time and time again how little they care about democracy or morality. In fact, the three officials mentioned in this petition are ones that have brazenly encouraged racism, violence, and wild conspiracy – and they have no place in our legislatures.

Sign here to call for insurrectionists to be banned from running for public office, including Trump!