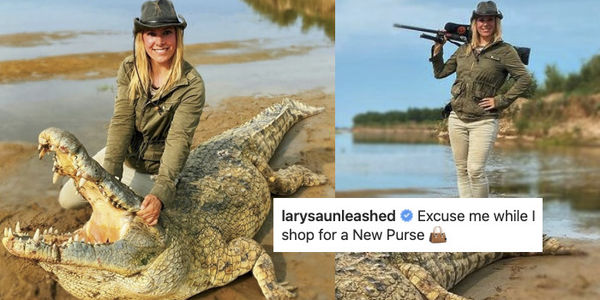 She murdered a 60-year-old crocodile just to make a purse, then posted the gory photos on Instagram

The Zambian crocodile was 60 years old, a veritable elder, when an American woman from Florida named Larysa Switlyk murdered it.

Posing next to its lifeless body and her firearm, she took several gleeful photos and then posted them on Instagram for her 980,000 followers to see. The caption she wrote for one photo read: "Excuse me while I shop for a new purse."

A purse?! No. This crocodile was a living breathing thing, until she snatched its future away.

This kind of violent cruelty does not belong on Instagram. Sign the petition to demand they remove Larysa Switlyk from its platform now!

This beautiful 15-foot-long wild crocodile isn't the only creature Larysa has murdered over the years. In fact, her entire Instagram page is filled with countless photographs of the dozens and dozens she has butchered, including this crocodile, a rhino, and big-horn sheep. Larysa claims to have massacred more than 116 different species in countries all over the globe — including a lion, leopard, and even an elephant.

In each photo she posts, she is grinning widely, clearly showing no remorse for any of the death and destruction she has caused.

Not only has she shown no remorse — she's actually using these Instagram photos as a way of intentionally causing more death, trying to recruit others to join her in future hunting rampages. She's even set up her own "women-only" hunting expeditions to try and make the "sport" of ripping life away from a wild animal seem sexy and cool.

Care2
She murdered a 60-year-old crocodile just to make a purse, then posted the gory photos on Instagram
TEILENTWEET