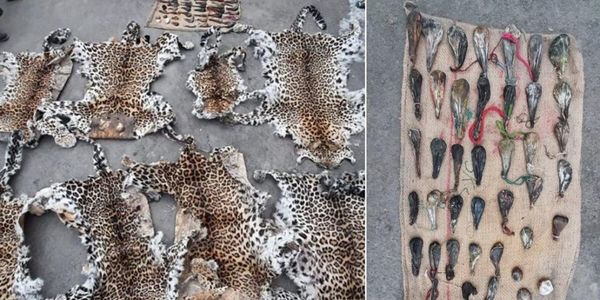 A heartbreaking discovery was made during a raid of a Northern Indian home at the beginning of 2021 -- defaced animal bodies from more than 50 victims turned into grotesque trophies.

Sign the petition asking the Wildlife Crime Control Bureau to do everything they can to find everyone involved in the murders and trafficking of these poor animals!

8 leopards, their skins stripped from their bodies and stretched to lay flat, a mere memory of the vibrant lives they moved through.

4 musk deer, tiny and extremely endangered, brutally killed just so that their musk glands can be harvested and used for medicine -- even though there is not enough research to prove these medicines even work.

A whopping 38 bears, killed for their gallbladders to be used in medicine, their effectiveness similarly unproven or long replaced by synthetic alternatives.

All of these animals were protected under the Wildlife Protection Act of 1972, but illegal wildlife poaching and trading continues in India, and has even seen an uptick since the beginning of the pandemic.

Only one person was arrested on the site of this raid. But another raid was conducted in the same region, and authorities arrested a partner in crime who was hoarding even more animal products. Obviously, these two people are not the only ones involved in what authorities are calling the biggest seizure of illegal animal products in recent history.

Illegal wildlife poaching and smuggling is extremely hard to fight -- while the current laws in India are strong, enforcement is spotty and it's easy for animal-murdering criminals to fly under the radar. That's why it's so important that the Wildlife Crime Control Bureau use this unprecedented victory to fuel even more victories -- they can find links between these two people and whoever is killing these animals, as well as who is purchasing the illegal products they're made into.

Fighting the illegal wildlife trade in India protects animals worldwide -- wildlife trafficking knows no borders, and neither do its ecological and environmental impacts. So many vulnerable and endangered animals are going extinct because of their demand on global black markets, and if we lose them once, we lose them forever. Plus, the more we take these animals away from their natural environments and put them into epicenters of human activity, the more likely we are to start another deadly pandemic.

This tragic discovery of dozens of animal bodies must be used to stop the cycle of death. Sign the petition asking India's Wildlife Crime Control Bureau to exhaustively investigate every point of interest and evidence that has come out of this raid! This would bring us one step closer to ending the illegal wildlife trade for good!