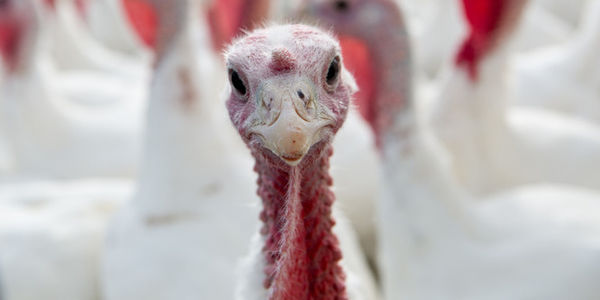 This past October, animal lovers in Canada and the U.S. were planning to work together to create an international day of protest to highlight the suffering of millions of imprisoned and tortured creatures at the factory farm called Hybrid Turkeys in southern Ontario.

More than 200 animal lovers were prepared to hold public demonstrations to bring attention to the turkeys' plight. But six of them barely even made it past their front doors -- because police immediately arrested them, threw them in jail, and charged them with "attempted mischief." In other words, these individuals were charged with potentially planning to do something they hadn't even done.

What is this? Are public demonstrations that haven't even happened yet somehow a crime now? Sign the petition to demand justice!

Since Canada's Thanksgiving Day is held in October, huge numbers of turkeys were about to be brutally slaughtered to provide for feasts all across the country -- without consideration for the animals' pain endured during the process.

One activist who was thrown in jail, Amy Sorrano, used the opportunity to compare her experience with those of the locked-up, misused animals in factory farms everywhere. Soranno shared that:

"I kept thinking about the mother pigs kept in gestation crates and the egg-laying hens in battery cages, the small space I was confined to was a mansion in comparison. [Unlike them,] I could move and stretch if I wanted to. And eventually, I was set free."


The government of Canada, though, seems to care far less about these animals' well-being than it does about protecting the secrecy of Big Ag. Its legislature recently passed a new law, Bill 156, that criminalizes the process of protecting animals from cruelty at factory farm facilities. Anyone who tries to expose animal abuse could be subject to fine, prosecution, arrest, and even imprisonment! It even lets farm owners make their own citizen arrests to protect Big Ag against the animal lovers.