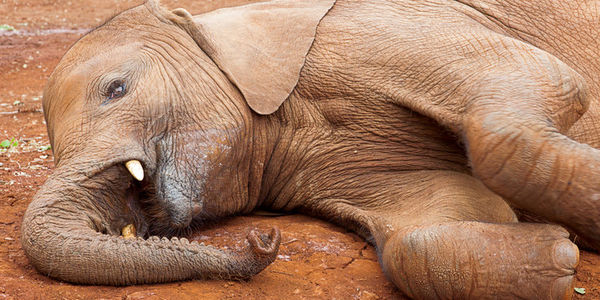 On the day she died, witnesses say that Beulah the 50+ year old Asian elephant collapsed three times at a Massachusetts fair. Each time, her handlers with the traveling Commerford Zoo allegedly forced her back on her feet, pushing her back into performance mode. By the end of the night, sweet Beulah the elephant was gone. She had been forced to entertain at the roadside zoo for 46 years, after she was sold to the Commerford owners in 1973.

Theoretically, in the U.S., animals are supposed to be treated well — including pet dogs and cats... and even elephants kept in roadside zoos. Unfortunately, insufficient regulation led to well-known captive elephants, Beulah and her friend Karen of Connecticut's Commerford Zoo, being abused all the way until their deaths.

The Commerford Zoo is a roadside attraction that travels around the Northeast of the country, dragging along lemurs, camels, a zebra, a kangaroo, and two elephants, Beulah and Karen. At each stop, these animals are expected to entertain humans — whether that be through giving rides, posing for photos, or some other form of performance.

Approximately 3,000 of these types of roadside zoos are in existence throughout the U.S., and most are licensed to operate by the U.S. Department of Agriculture (USDA). But in many cases, the USDA does not have the power to enforce proper treatment for the animals forced to travel with these zoos. For example, it is still legally acceptable for zoos to cart around ill or injured wildlife and stick them in entertainment-style events.

...Which is how we ended up here. The U.S. government knew about the horrible conditions Karen and Beulah were kept in, but was legally unable to intervene to keep them safe. This is partially due to the idea that "big government" should keep out of businesses' inner workings, and leave profit-seekers free to run their operations however they please.

In this case, that meant neglecting and abusing two aging elephants for years. Through government records, we now know government officials were aware that Beulah and Karen were sick, and that the Commerford Zoo was still trucking them around and making them provide rides for visitors. In the end, Beulah died from an insufficiently treated infection in her uterus, which poisoned the 50+ year old elephant's blood and caused her to collapse at a Massachusetts fair. She had already been sick for 10 years from tumors and other infections. Karen, her zoo companion, died from probable kidney failure. She was only 38 years old.

The U.S. Department of Agriculture should have been given the legal authority to intervene after it learned about the abuse and exploitation these elephants were being subjected to, but they couldn't because the federal Animal Welfare Act doesn't go far enough. While this law stipulates that roadside zoos must provide "adequate veterinary care" (whatever that means), it doesn't go too much further than that. Beulah and Karen deserved better. Let's make sure all other captive animals get the care they deserve.