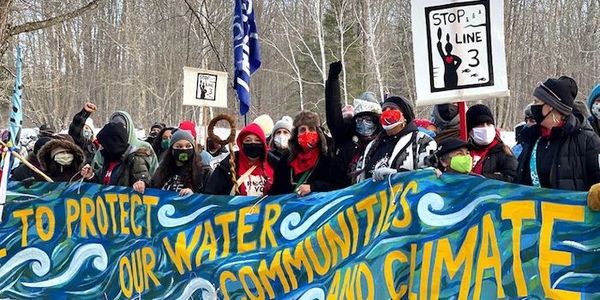 Line 3 is a proposed pipeline expansion that would bring more than 750,000 barrels of tar sands oil through protected Indigenous lands, from Alberta, Canada to Superior, Wisconsin every single day. This project, proposed by Canadian pipeline company Enbridge, violates long-standing treaties between the Anishinaabe people and the U.S. government. Crossing over 200 lakes and rivers, including the Mississippi River, it threatens 800 wetlands — areas on which the Anishinaabe people have the right to harvest wild rice, fish, gather medicinal plants, and hunt on their Native lands.

The environmental danger of Line 3 is enormous. In 2010, Enbridge's pipelines were responsible for one of the largest inland oil spills in U.S. history, which polluted the Kalamazoo River and took years to clean up. A similar leakage into the Mississippi River would devastate ecosystems and contaminate drinking water for communities in over a dozen states.

Construction on Line 3 can and should be ended today. The Biden administration has the power to cancel the federal permits that allow Enbridge to move forward — in the same way our government revoked the border-crossing permits of the Keystone XL pipeline.

While Congress continues to debate infrastructure spending, we recognize land and water as the most important infrastructure to preserve. Instead of desecrating the ground with more pipelines to carry oil, we must transition away from extractive practices that pollute and destroy.

Will you join in solidarity with Native water protectors and climate activists to resist the grave harm the Line 3 pipeline will inflict on our shared planet? Sign the petition today to tell President Biden that Line 3 threatens our human right to enjoy clean air, a livable climate, and safe water.
Das Petitionsschreiben lesen ▾
I write to urge you to immediately revoke the permits allowing the Enbridge Line 3 pipeline to move forward. This project violates Indigenous treaty rights, endangers the Earth's climate, and jeopardizes the safety and livelihoods of the communities who rely on the 227 different waterways the proposed route traverses.

If completed, the Line 3 pipeline is expected to transport 760,000 barrels of tar sands oil a day, leading to greenhouse gas emissions equivalent to building 50 coal plants. Enbridge has a history of causing oil leaks which threaten the waterways of nearby communities, including Indigenous people—the essence of environmental injustice.

Worst still, these environmental damages would interfere with the treaty rights of the Anishinaabe people to hunt, fish, gather medicine, and grow wild rice on these lands. The U.S. government, of which you are the executive, gave its word to honor this treaty. To violate this pledge now would be to perpetuate the genocide of Indigenous peoples.

As President, you have committed to address the climate crisis. To this end, you righly stopped construction of the Keystone XL pipeline, citing the grave harm it would inflict on our shared planet. Enbridge Line 3 poses the exact same danger to people nearby, who have a human right to enjoy clean air, a livable climate, safe water, and the treaty rights the U.S. government swore to uphold.

The power is in your hands. You have the ability to revoke or amend these permits and stop Line 3 from moving forward. I urge you to take this step before it is too late, and the project has already done irreversible damage to the communities its path.
Petition unterzeichnen
TEILENMit meinen Facebook Freunden teilenTWEETE-MAILEINBETTEN
Petition unterzeichnen
Mehr Petitionen sehen:
Sie haben JavaScript deaktiviert. Es kann sein, dass Ihre Website ohne JavaScript nicht richtig funktioniert.