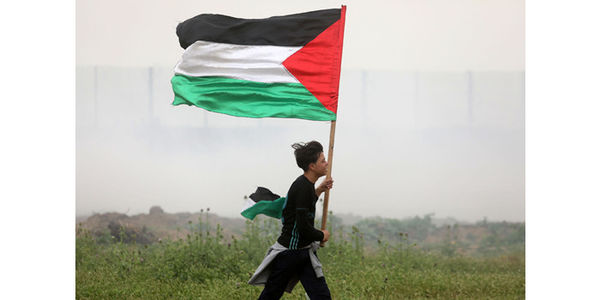 Stand alongside Palestinians in the age of far right extremism

For decades War on Want has been at the forefront of campaigns for Palestinian rights, as a part of our larger commitment to standing in solidarity with our partners around the world, fighting human rights violations and oppression. That's why we're raising the alarm over the Deal of the Century, which amounts to one of the biggest catastrophes facing the Palestinian people in this lifetime.

Since President Trump took office, the US government has doubled down on its already hostile approach to Palestinian human rights and self-determination, proposing a 'Deal of the Century' to solve conflict in the Middle East. Early talks to plan the deal have included several others states, namely Saudi Arabia, Bahrain, and the United Arab Emirates — in other words, some of the most repressive states in the region, aligning with Israel against the Palestinian people.

This deal is far from a negotiation between two equal parties. It is a plan to strip millions of Palestinian refugees of their rights and to allow Israel to annex parts of the occupied West Bank. It emboldens Israel's apartheid system of control over Palestinians.

The UK is duty-bound to uphold international law, including the rights of Palestinians to live in freedom and equality. But history shows us that this won't happen without grassroots pressure to force the government to stand on the right side of history and human rights, and oppose this deal. It will take sustained and focused campaigning to defend the rights of the Palestinian people in their struggle for justice, especially in the face of this escalating emergency.

Palestinians have called on people of conscience around the world to support them in their struggle for freedom and justice by uplifting their voices and stories, and holding government and companies to account. This is at the core of War on Want's work: we know another world is possible, one where everyone has the right to a dignified life and the realisation of their rights.

War on Want has a long history of mobilising support and building alliances for action in support of human rights. We've campaigned alongside so many struggles for justice - from our ongoing support to communities opposing land grabs and extractive mining in Colombia and Brazil, to our historic role in mobilising opposition to apartheid in South Africa.

It will take all of us working together to successfully defeat the Deal of the Century. Sign up with War on Want today and stay updated on our campaigns fighting human rights violations around the world.