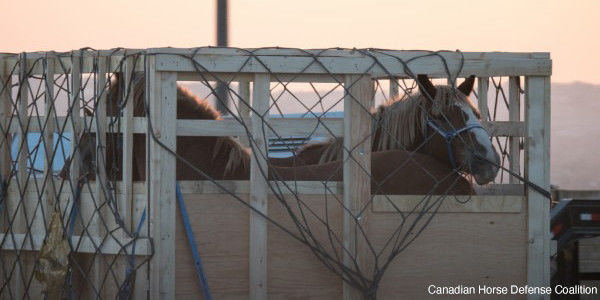 Ban the shipping of horses overseas for slaughter

Most Canadians don't know that Canada is one of the only countries in the world that breeds, raises and transports horses overseas to be slaughtered. These gentle draft horses are bred and raised in feedlots in Canada and are exported by plane on journeys that can take more than 20 hours. Since 2013, over 40,000 horses have been exported out of Canada.

These horses endure many hours without feed, water, and rest once they leave the feedlot and are loaded onto crowded trucks. They are driven to Calgary, Edmonton, or Winnipeg airports where they may sit on the tarmac for hours before being loaded into small crates together on a plane for a 10 to 13 hour flight. The flight may stop to refuel in Alaska, adding 2-3 hours to their long journey. Unfortunately, Canada's current animal transport laws allow horses to transported without feed, water, or rest for up to 28 hours — so this is practice is not illegal.

Imagine what it is like for a large draft horse to be loaded on a plane with three other horses into a single shipping crate smaller than the average horse stall. Overcrowding horses like this means that if a horse loses their balance during takeoff, landing, or turbulence, they won't have enough space to stand back up. Horses are also at risk of injury because horses in the crate may not get along throughout the stressful trip.

Current international airline transport regulations require horses to be able to stand in a comfortable position without coming into contact with the top of the crate, but eyewitnesses often report that crates are too short for the horses to stand comfortably without their ears touching or pushing through the top of the crate. When horses reach their destination after this difficult and long journey, they are unloaded from the plane and transported to another feedlot in to continue to be fattened before slaughter.

The BC SPCA strongly advocates that no animal should be transported without feed, water, or rest for more than eight hours. Horses are a species that has evolved to graze and would normally spend over 65% of their day eating. When horses are not fed regularly, they are at a much higher risk for painful and life-threatening conditions such as gastric ulcers and colic, and will show signs of stress.

The BC SPCA supports the Canadian Horse Defence Coalition's work towards ending the live export of horses for slaughter for human consumption. Most recently, the BC SPCA joined them and other animal protection organizations in sending an open letter to the federal government urging action on this issue.

Now we need you to take action!

Sign up to join thousands of Canadians to send a clear message to the federal government — horses deserve better. We will send you details on how to sign the federal petition before June 18 and keep you up to date on the campaign.
Petition unterzeichnen
TEILENMit meinen Facebook Freunden teilenTWEETE-MAILEINBETTEN
Petition unterzeichnen
Mehr Petitionen sehen:
Sie haben JavaScript deaktiviert. Es kann sein, dass Ihre Website ohne JavaScript nicht richtig funktioniert.

Care2
Ban the shipping of horses overseas for slaughter
TEILENTWEET