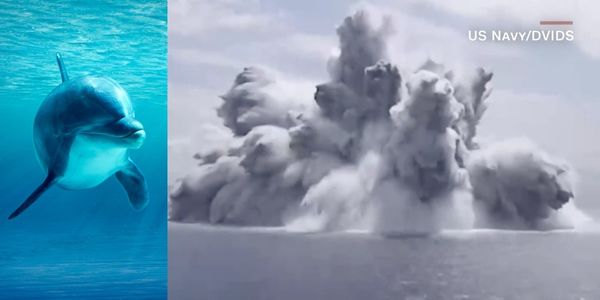 This massive Navy “test” bomb was the real thing for the unfathomable number of dolphins, whales, and other marine mammals it killed

In a perfect example of U.S. priorities, the Navy detonated a 40,000 pound bomb off the coast of Florida in precious wildlife habitat, blasting it and the animals there to pieces in order to test to see if "its newest aircraft carrier...is ready for war."

And this isn't even the last of what the Navy has planned. Every year they do thousands of these explosive, destructive tests, all to the detriment of our marine friends. Sign the petition and demand that the Navy find another way to test their ships that doesn't kill incalculable amounts of wildlife like dolphins and whales!

Any explosive test like this is horrifically violent for nearby marine mammals like dolphins, orcas, and whales -- it is likely to kill any of these animals within a mile or more, and any mammals within six miles of the blast can suffer horrible injuries and hearing loss. This is particularly heartbreaking when you think about how animals like dolphins and whales rely so heavily on echolocation, which requires them being able to hear each other, in order to communicate with their pods and families. A deaf marine mammal is basically doomed to loneliness, strife, or even death.

Worse yet, this test was way bigger than typical explosive tests like it, meaning biologists and environmentalists really can't fathom the death toll and reverberating impact.

The grim number of fatalities and the extent of the environmental destruction is hard to determine not just because this blast's size was particularly outrageous. It's also because the Navy literally doesn't employ trained biologists to monitor marine mammals that could be affected by their test bombs.

Concerned scientists and environmental experts call it "a black box of an exercise" because there is literally no way to tell what the Navy did to protect marine mammals before the blast -- or if they did anything at all. They don't have to disclose that information, which means they probably never will.

One thing we know the Navy didn't do is take into consideration time of year in order to avoid more animal death. The area off the coast of Florida where this massive bomb exploded is "home to populations of dolphin and small whales at this time of year," and their size means they are far more likely to die from the explosion than larger mammals. If the Navy had taken this into account, they would have done this test when those species had migrated out of the area.

The official Twitter account of the aircraft carrier in question tweeted a triumphant video of the blast, which was the same as a 3.9 magnitude earthquake. But all we see when we watch the footage of the blue water turning into a white cone is all of the animals, nearby and miles away, who are losing their families, their hearing, their safety, or even their lives.

Sign the petition and demand that the United States Navy stop needlessly killing marine animals -- they must come up with new ways to test their ships!

Care2
This massive Navy “test” bomb was the real thing for the unfathomable number of dolphins, whales, and other marine mammals it killed
TEILENTWEET