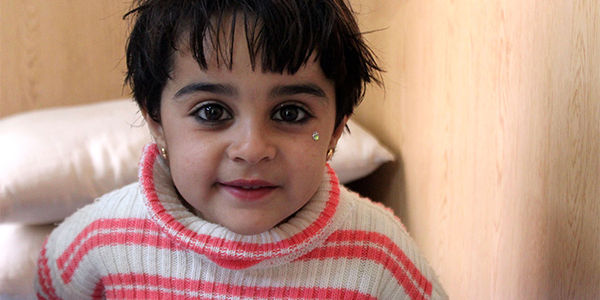 In December 2015 Malak was at home, playing with her brother and sisters and eating sweets, when her house was bombed in an air strike.

The building shook with a frightening boom. Shards of metal and debris shot through the air.

One of Malak's legs was fractured, the other blown off. Her brother was blinded and severely burned; her 8-month-old sister died in hospital.

Every year, tens of thousands of civilians, including children like Malak, are killed and injured by the use of explosive weapons* in populated areas like towns and cities. A shocking 92% of the victims of these attacks are innocent civilians.

Sadly, the use of explosive weapons in populated areas is all too common in ongoing conflicts, including in Syria, Afghanistan, Yemen and Ukraine. In Syria alone, more than 2 million children are at risk, living in fear of bombing attacks and unexploded weapons left behind like deadly buried treasure.

Urgent action is needed to protect civilians! Sign the petition below to demand justice for children like Malak and her family:

I call on the UK and all states worldwide to: