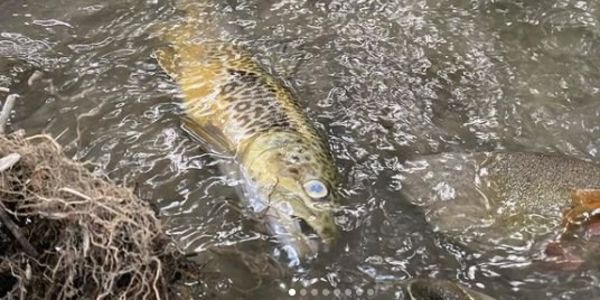 A construction company’s spill poisoned pet dogs and killed hundreds of fish. They must be held accountable now!

Unfortunately, we've grown accustomed to hearing about pollution in our water sources -- whether it's industrial waste from plants and factories, wastewater and sewage, or pesticides in runoff from farms and agricultural facilities, environmental agencies are constantly monitoring and attempting to curb these poisons to protect wildlife and humans alike. But a recent incident in the Mill Creek that runs through Salt Lake City, Utah, was unprecedented -- a yet to be determined amount of "concrete slurry" from a nearby freeway project poured into the creek, killing hundreds of fish and making pet dogs that drank from the water horribly sick.

Sign the petition and demand that the Utah Department of Environmental Quality (DEQ) hold Ralph L. Wadsworth Construction accountable for this horrific negligence that resulted in an unknown amount of animal death!

A person who was walking on Mill Creek Canyon Road, which follows along the creek, saw the dumping firsthand -- they described it as a "concrete freeflow slurry mix" pouring strongly into the life-filled waters below.

By then the sickness and death had likely already begun. Mill Creek's waters were white and ashen with concrete, and for a two-mile stretch, large trout could be seen floating belly up -- hundreds of them dead. People whose dogs drank out of the normally safe water on walks and hikes reported that their pets were getting sick. And residents have been advised to stay away from the water, as the unbalanced pH levels could cause terrible skin irritation.

How could this happen? How could gallons and gallons of concrete slurry be accidentally sent straight into the habitat of local wildlife, into the drinking source of domestic animals, into the usually safe water of Mill Creek? It was a complete lack of attention and total negligence on the part of Ralph L. Wadsworth Construction, the contractor of a project to rebuild parts of Interstate-215. A DEQ report on the incident stated that while filling a catch basin, the construction company failed to close the outflows of said basin. They were basically trying to fill a sink with water without first closing the drain. And that needless, careless mistake caused an environmental hazard and a mass loss of local wildlife.

This construction company, hired and overseen by the Utah Department of Transportation, must be held accountable.

Care2
A construction company’s spill poisoned pet dogs and killed hundreds of fish. They must be held accountable now!
TEILENTWEET