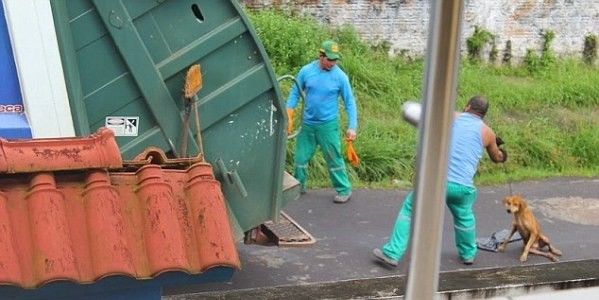 Demand Justice for Injured Dog Murdered in a Trash Compactor!

A trash collector in Brazil noticed an injured dog with two broken legs during his shift, and instead of trying to help the struggling animal, he brutally murdered it. This man hit the animal, then strung a chain around its neck and tied it up, and then he dragged the dog into the waiting garbage truck. He left the dog in there and let the trash compactor crush the dog alive.

The mayor criticized the trashman, and he was then fired, but that's it. This man will continue to treat animals as garbage unless he is punished or receives empathy training! This is not justice! Sign the petition to demand justice for this poor beaten, crushed dog!

Lets get him charged to the full extant of the law!

A garbage man is under fire for dragging an injured dog across a footpath before dumping it in the truck's compactor — but insists he did the pooch a favour.

Jadson James Franca, 35, has been sacked after a neighbour photographed him abusing the canine in Presidente Figueiredo, northern Brazil. Shocked residents saw the binman hit the stray dog, which had two broken legs, before tying a chain around its neck.

With his colleagues looking on, the garbage man proceeded to drag the canine along the pavement before throwing it into the vehicle's compacting mechanism. Once pictures of the cruel act, taken by a local photographer, were shared online, social media immediately exploded with outrage.

The animal was reportedly still alive when the truck pulled into the town’s rubbish dump but died of its injuries hours later.

The shocking images shot into prominence after popular Brazilian TV presenter Xuxa shared them with her 4.4 million Facebook followers. She wrote:

"This little dog, who wasn’t bothering anyone, had its legs broken, and in agony was tied up and dragged by the neck, before being brutally murdered by this individual, being thrown and crushed alive in the back of the garbage truck. This monster can still appeal against a fine and will still be walking the streets in freedom! Are we going to let that happen?? Let's do something?? Together we can."

Neilson da Cruz, the mayor of Presidente Figueiredo, told Brazil's A Critica newspaper that the garbage collector had been fired and his employer, ViaLimpa, would face an undisclosed fine.

The mayor criticized the behavior of the residents who had filmed Franca’s act, rather than try to prevent it. He told the newspaper:

"These people are more preoccupied with making recordings that with saving the animals. This is an absurdity."