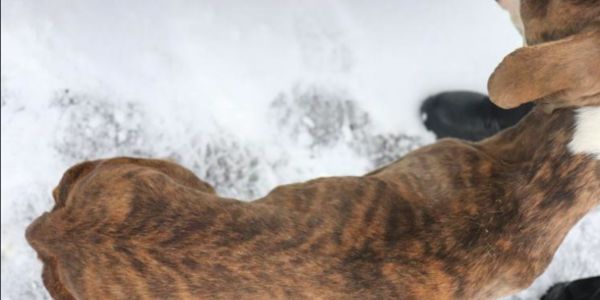 Three Neglected Dogs Found, One Starved to Death and Suspect is Still Not in Custody!

*Photo is of one of the surviving dogs, who was severely malnourished when found*

At the very end of the worst year, 2020, a horrible case of animal abuse and neglect was discovered in Michigan. Three dogs were recovered from a home, but only two of them were alive.

Sign the petition to demand necessary resources are put towards finding the culprit of this horrendous abuse and bringing him to justice!

Authorities received a tip about animal neglect on December 30th, 2020, and shortly after, they entered the home. First, they found a dog in a room full of feces who had starved the death. The veterinarian who examined the dog -- which was only a couple years old when it died -- said the animal hadn't eaten in at least 30 days. There was no food in its stomach and no feces in its colon, meaning it must have suffered a long time and died a painful death, something no living being should ever experience.

Next, they found another dog named Maddie, maybe from the same litter as the first given age and breed were similar. Maddie was 20 lbs underweight and malnourished. The vet said she should have weighed between 55-60 lbs, but was hovering around 40 instead. Luckily, the third dog was in a bit better condition. But in the home, there was no water available to the dogs and the food was out of reach to them.

Given that the animals were found in a home, it doesn't seem like it would be too hard to figure out who is responsible for this shameful abuse. We need to keep pressure on authorities to find the culprit and make sure they never have access to animals again! And we also need to get the word out to anyone in the area who may be able to identify the perpetrator.

Care2
Three Neglected Dogs Found, One Starved to Death and Suspect is Still Not in Custody!
TEILENTWEET