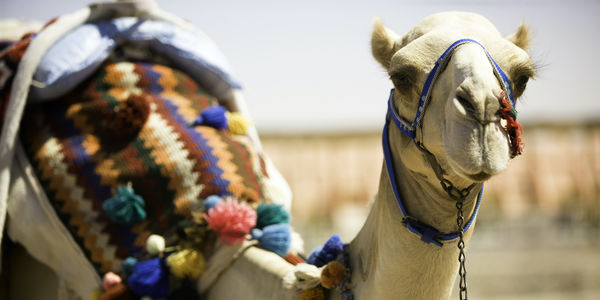 Every year around mid-January, the annual International Camel Wrestling Festival in western Turkey commences. The contest area fills with hundreds of camels covered in brightly colored decorations - as well as muzzles to keep them from biting and seriously wounding each other - who will tussle until humans declare one of them the victor.

But now, the "sport" is now coming under heat from Turkish animal lovers who want to protect camels from abuse and cruelty.

Sign the petition to demand an end to these inhumane camel wrestling matches!

This year, handlers gathered 152 camels together for the tradition's 40th event. During the tournament, thousands of eager spectators surround the wrestling creatures, setting up barbecues and roaring as camels dominate one another. Vendors even sell camel meat snacks and street food to viewers who munch on the cousins of the very animals they're watching. And meanwhile, camels wrestle until one or the other topples over, screams out, or retreats in fear.

Spectators claim that because the sport is billed as "wrestling" instead of fighting, it's not harmful to the animals and is instead just an innocently fun pastime. Turkish animal lovers are pushing back, calling the annual wrestling matches "shameful" and are pushing others to see the inhumanity.

These animals are exposed to unnatural conditions that cause them to feel confusion, stress, fear, and panic - which is how humans are able to force them to act in aggressive ways, just for our entertainment. From the loud noises of spectators, to the training involved in convincing camels to wrestle each other, animals are still being used and exploited.