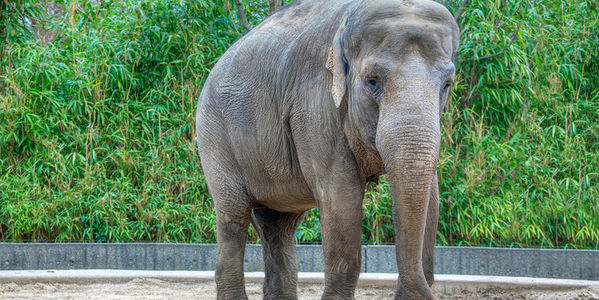 Captive elephants are only given 0.33% of the healthy space they need. It's time to ban zoos from imprisoning elephants.

Later this year, the British Parliament is set to pass the Animal Welfare (Kept Animals) Bill — and in it, we expect to see a ban on holding elephants captive in zoos and safari "parks." A recent government investigation found that there is no way for zoos or similar facilities to ever provide elephants with adequate resources to live a healthy life.

While this bill is good news, it hasn't passed yet. And unfortunately there's still just enough time for opponents to try and prevent this legislation from passing — unless we speak out loudly and demand Parliament stand firm.

Sign the petition to demand that the U.K. government ban zoos from holding elephants captive!

In their natural habitats, elephants live in close-knit communities and family units, displaying nuanced social dynamics such as lifetime bonding, caring for each other when injured, and mourning their dearly departed.

Together, elephant herds forage for food, walking as many as 30 miles every single day. By contrast, even some of the biggest zoo enclosures are just 0.1 mile by 0.1 mile large (with an area of around 7.5 acres total). That's a tiny fraction of the daily ground elephants have evolved to cover, and need to walk to keep their health in order. These are just a few of the reasons why captive elephants often don't make it past 17 years old — while in the wild they routinely live for up to 50 years.

Back in January 2020, the British government already banned the use of elephants and other wild animals in circuses, which was a huge move to protect the welfare of these precious creatures. But in the meantime, other elephants have still been languishing in hostage-like situations, held prisoner to make parks money and intrigue humans.

Care2
Captive elephants are only given 0.33% of the healthy space they need. It's time to ban zoos from imprisoning elephants.
TEILENTWEET