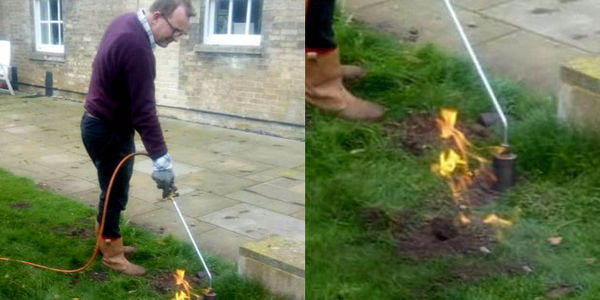 He tried to blowtorch animals to death, but he's still a political leader.

John Fuller, a British politician, once won the Order of the British Empire (OBE), the second-highest ranking honor in the UK. He went on to become the leader of his local council in South Norfolk District, England.

And his latest distinction is that of gleeful animal-murderer.

Sign the petition to demand that Councillor Fuller be charged with committing the crime of animal cruelty! He must also be stripped of his leadership in the South Norfolk District Council!

Not only did Fuller attempt to commit deadly violence against animals — specifically, wild moles — but he went on to brag about it. In fact, the reason we even know about his vicious cruelty is because he himself took photos of his efforts to burn these animals alive, and then posted those pictures to his social media account.

In the caption, he wrote: "A great day to be killing moles."

Apparently, Fuller was angry because the creatures had burrowed into the dirt in his backyard, as ground-based animals are wont to do. They don't know anything about human property lines or the above-ground distinctions between yards and parks. But Fuller wasn't interested in their lives or normal animal behaviors.

He loaded up a wheelbarrow, filling it with a propane tank, long hose, and a blow torch. He wheeled his equipment over to several brown areas in the lawn. And he shot rows of flames into the animals' underground homes.

Chris Packham, a famous British wildlife expert and conservationist has spoken out against Fuller's actions, saying: "It's animal cruelty of the highest order. And also clearly illegal."

Care2
He tried to blowtorch animals to death, but he's still a political leader.
TEILENTWEET