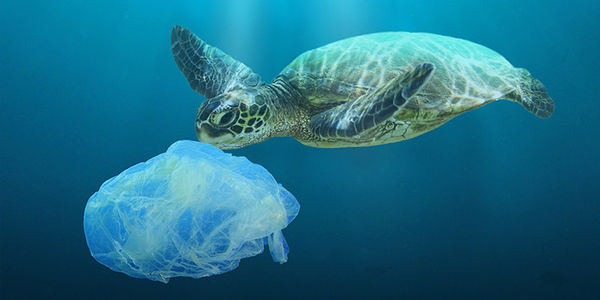 TELL THE GOVERNMENT TO END THE PLASTIC DISASTER

URGENT: Tell the Canadian government to stop Big Plastic from flooding our oceans with plastic trash.

For more than half a century, the plastics industry has deflected blame on to consumers or "litter bugs" for plastic pollution, rather than investing in reuse systems or alternative plastic-free choices.

But it's not your fault.

Now is the time to demand that the government stand up to Big Plastic and cut this harmful pollutant off at the source. We need a strong ban on harmful single-use plastics in Canada.

The Canadian government is taking steps to turn the tide on plastic pollution but is only planning to ban six single-use plastic items: plastic bags, stir sticks, six-pack rings, straws, cutlery and takeout containers made from plastics that are hard to recycle. These six items are only a "fraction of one per cent" of the plastic products we use — a drop in the bucket for an ocean drowning in plastic pollution. As-is, the ban will barely make a dent in the 3.3 million tonnes of plastic that is thrown away in Canada every year.

JOIN US AND TELL THE CANADIAN GOVERNMENT TO CREATE A STRONG BAN ON SINGLE-USE PLASTICS.

I support the federal government's commitment to ban harmful single-use plastics by 2021. I am concerned about Canada's plastic consumption and the plastic disaster facing our oceans.

• Items that have already been banned in other jurisdictions, like plastic-stemmed cotton swabs, plastic cartons for eggs, produce and fruit, and lightweight produce bags;
• Items that are like others on the list but that have been excluded, for example, hot/cold drink cups and lids;
• Materials that are harmful to the environment or human health, including oxo-degradable plastics, all forms of polystyrene and multi-material packaging – which cannot be recycled; and
• Other items which are prevalent in the environment and litter our shores.

There is broad public support for strong federal leadership to address Canada's plastic pollution crisis. The majority of Canadians support the ban, and nearly two thirds think it needs to go further.

I am calling on you to ensure the single-use plastic ban gets Canada on track to a zero plastic waste future and follows scientific advice to eliminate the most harmful and unnecessary single-use plastics. As Canada boasts the world's longest coastline, touching three oceans, we have a national and global responsibility, and an opportunity, to show leadership and to provide Canadians with what they want: plastic-free choices.

Care2
TELL THE GOVERNMENT TO END THE PLASTIC DISASTER
TEILENTWEET