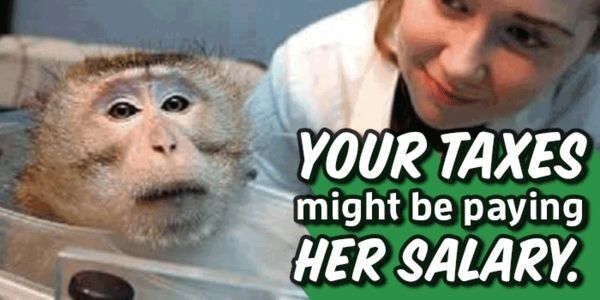 NIAID Steals Monkeys from the Wild for Experimentation!

The U.S. National Institutes of Allergy and Infectious Diseases (NIAID), formerly led by Dr. Anthony Fauci, owns over 3,000 monkeys on a secret island off the coast of South Carolina.

Every year, monkeys are taken from this island and shipped to government labs across the country, where white coats then torture them in maximum-pain experiments. You pay the $17.1 MILLION tax bill!

These experiments include depriving the monkeys of food and water, infecting them with the world's deadliest diseases, and withholding anesthesia and pain relief. NIAID white coats want them to feel every moment of extreme pain and misery.

In one experiment, NIAID's white coats injected 12 monkeys from the island with the deadly Crimean-Congo Hemorrhagic Fever virus. They developed fever, lethargy, and hemorrhages. Any monkeys that survived the infection were slaughtered anyway. (NOTE: the experimenters admit the tests were "funded by the Intramural Research Programme of the NIAID.")

In other experiments uncovered by WCW, the monkeys were infected with Ebola, tuberculosis, and COVID-19.

Infecting monkeys with debilitating illnesses isn't just cruel; It's incredibly wasteful.  The government itself admits over 95% of its animal testing fails in people!

Enough is enough. Add your name to stop NIAID from wasting your tax dollars to torture the primates of Monkey Island!

Care2
NIAID Steals Monkeys from the Wild for Experimentation!
TEILENTWEET