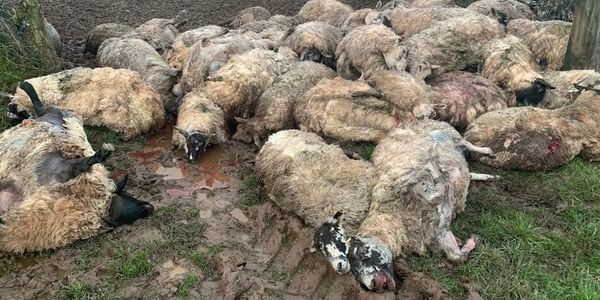 50 pregnant mama sheep and their unborn lambs were horrifically killed. A dog leash could have prevented it all.

"Heartbreak in a video."

That was part of the caption under footage posted to social media of 50 sheep, all of them pregnant, dead and piled on top of each other. But they were not killed and then placed in a heartbreaking heap afterwards. They actually perished that way: huddled together, pushed up against a stone wall, so terrified and desperate to escape that they suffocated and crushed each other to death.

What could have scared them so terribly? All it took was one, or maybe two, off-leash dogs.

Sign the petition and ask that the United Kingdom's Parliament revise the Countryside Code to require by law that dogs be kept on leashes in rural and agricultural areas!

The pregnant sheep were untouched by the dogs that chased them. But that doesn't matter. The sheer terror of being chased by a dog -- descendents of sheep's natural predators -- "can be enough to kill a sheep" from stress alone. But in this case, that stress triggered the flight instincts of a whole mass of sheep. Who knows how long they sprinted and fled from the barking, relentless dogs before they were finally trapped in the corner of their pasture next to a stone wall where they ultimately died. With nowhere left to run, the sheep pushed and squirmed together -- resulting in them all being crushed, suffocated, and killed, along with the lambs they were carrying.

It's called 'sheep worrying,' and -- along with direct attacks -- it has been on the rise during pandemic lockdowns, with people taking more and more advantage of the outdoors and bringing their unleashed dogs with them. In the same month that these sheep were killed in Wales, another 18 sheep died as a result of a dog attack in Yorkshire. The month before, off-leash dogs in a village in the east of England killed 16 sheep and injured another 28 so badly they had to be euthanized. There are many other tragic incidents like this; too many to list.

The Countryside Code is England's set of rules for visitors to agricultural and rural areas that promote the safe and equitable enjoyment of these beautiful lands. Essentially the guidelines remind people to respect and protect other visitors, landowners, farmers, livestock and wildlife -- such as leave gates as you found them, do not block driveways, do not interfere with the land by taking anything or leaving trash behind, and "keep dogs under effective control." But obviously the relaxed nature of that statement isn't working.

As nice as it is to allow our precious pups to enjoy unrestricted movement outside, it cannot come at the cost of other animals' lives. Even if a dog is well-behaved at home, sweet to a family, good with other dogs, etc. -- it does not indicate that they will behave in a way that keeps sheep, cows, and other livestock (not to mention wildlife) safe and unafraid. Even if a dog does not directly attack an animal, chasing or cornering them can clearly kill them too.

Sign the petition and ask that the UK government update the Countryside Code to require all dogs in agricultural and rural areas be leashed at all times, for their own safety and the safety of all other animals!

Care2
50 pregnant mama sheep and their unborn lambs were horrifically killed. A dog leash could have prevented it all.
TEILENTWEET