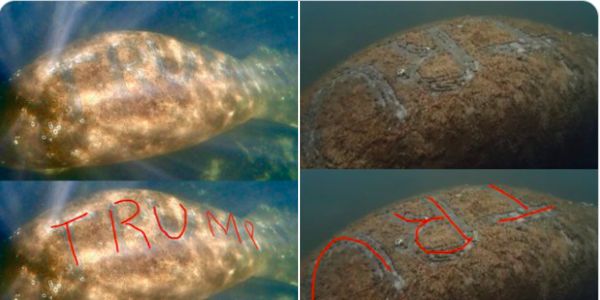 Someone Carved "Trump" Into a Manatee's Back, Proving Yet Again That Animal Abuse is Part and Parcel of Trumpism.

Horrifying animal abuse has been uncovered in Florida. And unsurprisingly, it's related to the far right and Trump. Someone captured a manatee and restrained it long enough to carve "TRUMP" into the poor creature's back. This sadistic animal abuser must be caught and charged immediately.

Sign on to spread the word and put pressure on the appropriate agencies to find and charge the person or persons responsible!

*If you or anyone you know has tips, please call the Florida Fish and Wildlife Conservation hotline at 888-404-3922.*

The sweet manatee was discovered the weekend after the violent attempted coup by Trump and his supporters at the capitol building. Clearly Trumpers are dangerous, but lashing out on an innocent animal because you didn't get your way politically shows just how dangerous. Luckily, the carving was just into the algae on the sweet animal's back, so it doesn't appear the animal was actually cut. But it was definitely traumatized! Not to mention, Manatees are a threatened species in Florida.

Unfortunately, none of this is shocking considering Trump has spent his entire time in office removing protections for endangered animals, making trophy hunting easier and more. Not to mention in his personal and business choices -- his golf courses have decimated whole ecosystems for his personal profit (though he's in tremendous debt and most of his ventures don't make money) and he doesn't care. Of course his cult following would share the same disregard for animals as him.

This heinous act of animal abuse must be investigated swiftly and sparing no expense. The penalty is reported to be a year in jail and a $50,000 fine. Animals did nothing to deserve the wrath of angry fascists. Sign the petition today.

Care2
Someone Carved "Trump" Into a Manatee's Back, Proving Yet Again That Animal Abuse is Part and Parcel of Trumpism.
TEILENTWEET