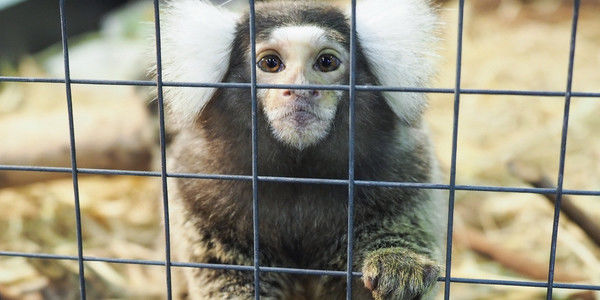 This lab electroshocks monkey's genitals, amputates their fingers, and tears infants from mothers. It must be shut down, now!

At this laboratory, primates are put through conditions so disturbing, "nightmarish" doesn't even begin to describe it.

Male monkeys are dragged out of metal cages by their necks and locked into restraint chairs. Once strapped in and unable to move, staff bring out electric shocking devices. They lower the devices to the animals' genitals. And then, helpless to escape, the monkeys' penises are shocked over and over and over again until they finally ejaculate.

This sounds like the kind of thing that could not even possibly be real. But it is, and an undercover whistleblower for PETA witnessed these experiments occurring first-hand.

Where could such horrendous types of research possibly be conducted? At a renowned university funded by federal tax dollars — the University of Wisconsin at Madison (UW-Madison).

Sign the petition to demand that the gruesome primate lab at UW-Madison be shut down, now!

The experiments described above are only one part of the problem. Staff are also extremely numb to the monkeys' emotional needs, neglecting and tormenting them as a result. The "lab rat" primates are shut away in rooms without windows or natural sunlight, inside metal cages just barely large enough to meet federal regulations. Infants are regularly torn away from their mothers. Some are put through surgeries performed without proper anesthesia.

In one case, a monkey — still stuck inside his metal cage and screaming to be let out — was run through equipment designed to wash cages at extremely high temperatures. The wailing animal died as a result of this torture.

In another incident, a supervisor confided that one of their staff members was a "bit too ... rough" and broke another monkey's leg. Still more animals have lost parts of their fingers and toes from amputated injuries, often sustained while they are desperately trying to escape.

Other captive, experimented-upon primates at the lab have taken to self-mutilating. One, called "r12050," created an open wound on his own leg and continued scratching and digging until he'd bored a hole into his body that went all the way down to his muscle. Meanwhile, multiple other monkeys have resorted to an activity born of severe trauma called trichotillomania, in which they pull out all their hair — even to the point of becoming completely bald.

The list of abuses at this window-less, dungeon-like horror facility goes on and on and on. There are quite literally far too many accounts of trauma to address here.

No university should be affiliating itself with this level of out-and-out sadism. There is NO EXCUSE for this kind of brutality and callous disregard for animals' rights. Yet as of now, there are still approximately 2,000 monkeys trapped in this research facility's premises.

Care2
This lab electroshocks monkey's genitals, amputates their fingers, and tears infants from mothers. It must be shut down, now!
TEILENTWEET