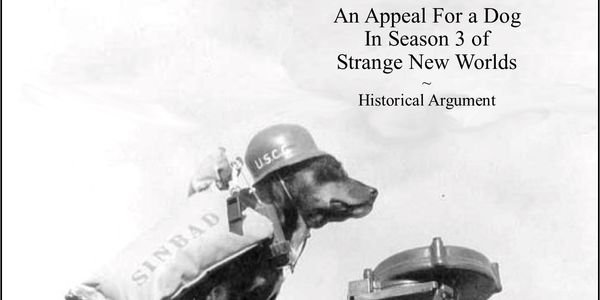 To the person reading this, I hope you’re enjoying the day.

The idea for an Enterprise dog came to mind when I was reminded of a local four-footed hero named, Sinbad.

From 1937-1948 he was a full member of the Coast Guard with his own service number, uniform, a service record, hammock, and a rank; First Dog.
He served during WW-2.

It was said of him, “Sinbad was a salty sailor but he’s not a good sailor. He’ll never rate gold hash marks nor good conduct medals. He’s been on report several times, and he’s raised hell in a number of ports. On a few occasions, he has embarrassed the United States government by creating disturbances in foreign zones. Perhaps that’s why Coast Guardsmen love Sinbad—He’s as bad as the worst and as good as the best of us.”

OK, the Enterprise dog would be more civilized, possibly.

Don’t get me wrong. Porthos was a beautiful animal. But by the end of the series, Star Trek: Enterprise, the only thing I knew about him was that he liked cheese.

The dog’s introduction could be an away team being startled by some animal. They see that it's a dog that’s trapped. They chuckle and after a humorous rescue it’s decided by majority vote to bring the dog along. “Not a good idea.” someone says.

That statement proves true due to the dog’s antics. Then the situation grows critical. But through an act of bravery and self-sacrifice the dog helps save the away team and we’re left certain that dog died a heroic death. Duty and honor.

If they knew, Klingons would compose an opera for it!

Away Team: Transporter room, come in!

Away Team: Prepare to beam up a new crew member.

Away Team: Have sickbay stand by and replicate a bison steak.

The operator works the control. The sound of the transporter is heard.
The camera slowly pulls towards his face.
The expression on his face changes from curiosity to confusion, to joy then panic.
He quickly exits screen right.

Away Team: Transporter room, are you there?

The transporter operator suddenly returns with a smile on his face and an exhausted dog in his arms, (Providing the dog isn’t a Saint Bernard.)

I like virtuous names and for the Enterprise mascot I’d want a name that may have been heard aboard a sailing vessel during the late 18th. And of course, the ships
mascot should reflect the tone and themes of the series.

After some Googling I found only one word with all the qualities I was looking for.
And that name is, Concord. Yea, I know, I know. It sounds like a name that may have been heard aboard a sailing vessel during the late 18th century. But after all, the first Navy ship to bear the name Enterprise was a 70‑ton sloop that was christened on the 10th of May 1775.)

Also it will give fans something to debate!

Used in a sentence: “Our goal is to live in concord with sentient beings of different species and beliefs.” Sounds like Star Trek to me!

Spock: Protocol calls for a rank before being issued (pause) a uniform.

Pike: (To the dog) You now hold the rank of, Chief Dog.
Has it been assigned general quarters?

Pike: Get on it. It looks healthy enough. How’s it’s appetite?

Spock: It’s appetite is fine, It seems to prefer bison steak.
Has a name for it been chosen?

I imagine an episode something like, “Data’s Day.” The TNG episode where it begins as a “standard crew routine” episode. Then something happens, somebody dies and off we go!

Perhaps having our furry hero going about his daily routine.
Perhaps making sure all’s shipshape.

Then something happens, somebody dies and off we go!
Then things get serious. A sudden battle, perhaps? Our hero is gently rocked back and forth in his hammock from the shaking of the ship.

Then the situation grows critical. Perhaps the ship is boarded? That’s when our canine warrior suddenly awakens with an expression on it’s face that can only be translated as,
“Son of a Bitch!”

Perhaps an episode with a scene where it try's to seal the deal with some sexy alien canine that has green fur.

It practically writes itself!

In 1948 Sinbad received an honorable discharge. (The Coast Guard decided to
discount his two Court Martials .) He spent the remaining years of his life at Barnegat Coast Guard Station in New Jersey.

A granite monument was placed at the base of the flag pole.
He died on the 30th of December 1951.

Do you feel this story is an inspiration enough for a dog aboard the Enterprise?
Of course you do! Sign up and spread the word.

PS.
A old friend of mine tole me, with a tone of voice to prepare me for the emotions refer to as, disappointment. Paraphrasing: As far as the producers are concerned there are enough testicles on the bridge." I wagered him $1000.00 dollars that he would be proven wrong. Please prove him wrong! To me, that's a lot of money. I'd have to cut out my yearly tattoo budget!

PS, A friend of mine told me with a tone of voice meant to prepare me for the emotion humans call, disappointment. “There going to change him to a female dog.”

He essentially meant, (Paraphrasing), “As far as the producers are concerned there are enough testicles on the bridge.”

I wagered, $1000.00 they would leave Concord's furry scrotum be.
Please prove him Wrong! This seriously cuts into my tattoo budget.
Sign Petition
SHAREShare With FriendsTWEETEMAILEMBED
Sign Petition
See more petitions:
You have JavaScript disabled. Without it, our site might not function properly.