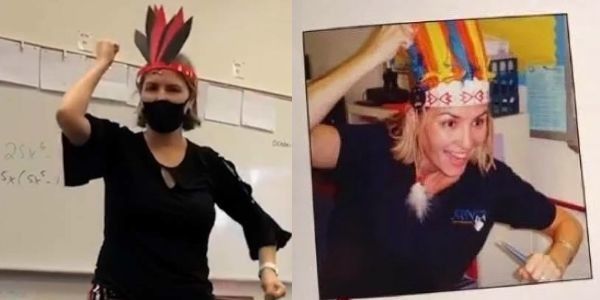 Shrieking and wearing a fake headdress, this math teacher made fun of Indigenous peoples for years

*CARE2 UPDATE 2/8/2022* Candice Reed has been terminated from her position at John W. North High School. But this offensive, harmful behavior was allowed to continue for nearly a decade without superior intervention, leading us to believe that this is not just an issue of one person, but a systemic and deeply rooted one. Until Reed's superiors -- every single one that could have done something, but didn't -- are suspended and make clear that they ackowledge their toxic and dangerous negligence, we cannot stop fighting. The kids at this school and the community members at large deserve that. Keep signing and sharing the petition.
-----
For upwards of 9 years, a white high school teacher in Riverside, California had been mocking Indigenous peoples, laughing and making fun of Native American heritage during her classes. Even though they knew about it, no officials at the school seemed to care.

Ms. Candice Reed, as part of her math class, routinely donned a fake, homemade Native American headdress -- and then paired it with jumping and exaggerated dancing around the classroom, making "tomahawk chop" gestures. Supposedly this was supposed to help the students learn trigonometry, because all the while she was screaming math terms.

And, to make this horrible story even worse, the teacher did this in front of an Indigenous student in her class. She mocked his people right in front of his face. And her supervisors didn't intervene until footage of one such "lesson" went viral on social media and public pressure made it impossible to continue turning a blind eye.

Sign the petition to demand that Ms. Reed's superiors at the school and at the District level be suspended at once!

It didn't even stop there, though. The math teacher also laughed and made fun of Native religious beliefs. Giggling, she made a dramatic display of mock-praying to a water goddess, asking her to "tell me the secret Indian chant." Then she burst into laughter saying: "Obviously this is ridiculous."

How would this teacher -- or any one of us -- feel if someone made fun of our spiritual or religious beliefs (or lack thereof) like this? If they pretended to pray to a deity we believed in, then breaking off and peeling into laughter about how "ridiculous" it is? And of course, this racist intolerance didn't just happen anywhere. It happened in a classroom, where dozens of young people were apparently taught that this is normal behavior.

The biggest issue, though, isn't that this teacher did what she did. It's that school officials KNEW ABOUT IT for nine years.

Back in 2012, the teacher's racist ways were even featured in the school yearbook as an inspiring example of how a teacher could really connect with her students. The yearbook praised how the teacher "wears an Indian headdress to emphasize geometry basics."

The real problem here, according to the Indigenous community of Riverside, California, is that this behavior was allowed to go on for so long. The teacher herself is to blame for her own actions, of course, but her superiors are to blame for not intervening. This racist well runs much deeper than a single math instructor. Yet the school district has been happy to scapegoat Ms. Reed, claiming it's all on her. She's been suspended. But all of the District officials who turned a blind eye for so long are still on staff and getting their paychecks.

All supervisors who allowed this teacher's racist mockery of Indigenous peoples must be suspended and publicly apologize for their role in perpetuating this behavior!
Sign Petition
SHAREShare this petition with friends!TWEETEMAILEMBED
Sign Petition
See more petitions:
You have JavaScript disabled. Without it, our site might not function properly.

Care2
Shrieking and wearing a fake headdress, this math teacher made fun of Indigenous peoples for years
SHARETWEET