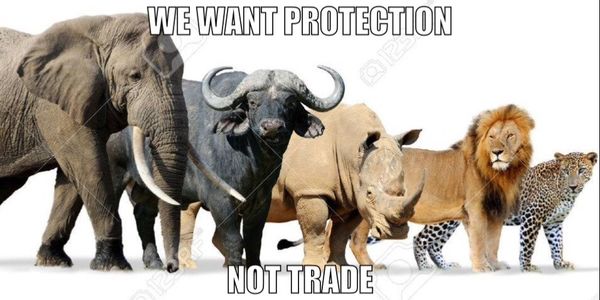 A VOTE OF NO CONFIDENCE IN CITES

We the People of The World declare a 'Vote Of No Confidence in CITES'. We demand it be dissolved immediately and replaced with an organisation in Protection of Endangered Species Committee, headed by NGO's who have a vested interest in the welfare and wellbeing of endangered species and all other wildlife.

Since CITES inception, Earth has lost half its wildlife population. This fact alone is proof of a broken system that is outdated for our overpopulated planet and struggling wildlife.

Incidents such as the capture of juvenile elephants from Zimbabwe to China for various zoos and theme parks have left us shocked and heartbroken that this is happening in an educated world.

There is no mention in the CITES regulations whether the trade is detrimental or whether they were legally obtained, nor is there any independent checks from the International community or CITES on their capture, quarantine quarters or their destination.

Further, China officially imported 50 live elephants from Laos, as stated by the CITES trade data base, and undercover interviews by Karl Ammann revealed a further 30 went in 2017. Laos has no record of the corresponding exports.

Article VIII of the Convention dictates that parties involved in the illegal import be prosecuted, the animals in question confiscated, and if possible, repatriated.

CITES allows China to determine whether the facility receiving imported elephants is suitably equipped to house and care for them. There is no requirement for outside independent assessment. Elephants in China are kept in cold concrete cells, chained and confined, hardly an adequate replacement for the savannahs of Africa with their family and herd.

The quality of CITES decision making process needs to be called into question.

We the People of the World, demand an end to trophy hunting as it does not enhance the survival of the species. As per Conf 17.9

Wildlife populations have plummeted. Research shows that only 3% of fees for big game hunting go to local communities and the amount dedicated to conservation efforts is negligible. Big game hunters target the largest strongest members of a population, which play a crucial role in their societies. A good example of this is the killing of a male dominant lion often means the death of a whole pride when rival male lions take over the hunted lions territories. Females fight for their territories and their cubs. Cubs are often killed by the rival male lions; no more offspring is produced from the prized lion. A snowball effect of enormous tragedy amounts from one hunt, not exactly what nature intended.

It is absurd that trophies can be exported on the grounds that the trophy was legally obtained by the hunter through hunting for the hunter's personal use. Conf 17.9

Lions have lost 95% of their population since the 1940's, there numbers are down by 25% in just over the last 10 years, yet they are still be hunted for trophies. The African elephant is in free fall due to poaching and trophy hunting, numbers decimated in recent years. The rhinos are facing extinction due to the nonsensical rhino horn trade. There are less than 7,000 cheetahs left; there is no known accurate number for leopards as they are difficult to count due to their elusiveness.

We the People of the Planet want a complete end to the Ivory Trade – no exceptions. Some parties to CITES and organisations subscribe to the view that the current elephant poaching crisis was caused by the2008 one off ivory sale instigated and approved by CITES, and is driven by speculation about the possibility of future legal commercial international trade in Ivory. Many experts blame this one off sale for the surge in poaching that followed. There is some concern that some buyers are acting as speculators, creating large stockpiles of ivory in anticipation of higher prices brought on by extinction (Conservation Magazine 2015)

Unchecked demands for tiger parts, leopards, lions and jaguar are killed and traded illegally for tiger bone. Given this grave and complex situation it is highly irresponsible to continue to feed this demand with sale of lion bones.

Importers of South African captive lion bone are linked to known wildlife trafficking syndicates, which for years it has been widely known to be involved in illegal trade in tiger, rhino and elephant.

There is no excuse for continuing the trade, or even more so, to allow in the first place.

Farming lion cubs to later hunt them is unconscionable, cruel and barbaric. Canned hunting does zero for conservation and is immoral and unethical. How any member could vote to agree on this shows how sadly the system is a ruse.

Care2
A VOTE OF NO CONFIDENCE IN CITES
SHARETWEET