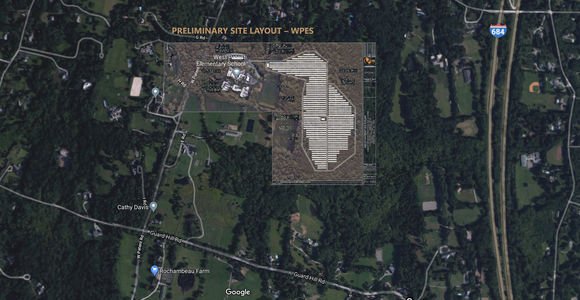 I am signing this petition to register my opposition to the BCSD's proposal to lease 30 acres of open space to Brightcore Energy for the purpose of building a commercial solar farm.

There are strong efforts by commercial solar developers to bypass or otherwise change local zoning laws to profit from our open space in the name of clean energy. Currently,

Bedford residents are ardent supporters of solar energy. Just drive around our scenic roads and you will spot solar panels on houses, barns and property. We value solar energy and we value open space: our woodlands, meadows and horse farms define our community. Commercial solar farms belong in commercial districts - not on our open space. Similarly, the BCSD owns acres of parking lots and rooftops, which can be used to generate solar power. Developers armed with tax incentives and rebates argue that open space is more "cost-effective" to develop solar power rather than more sustainable locations like parking lots and rooftops. That may be true for the developer's bottom line, but our open space has value - to our lifestyle as well as our homes. Bedford has worked tirelessly to preserve these woodlands and fields. Additionally, the developers argue that a limited group of residents may be eligible for a small discount on their electrical bill, but there are existing programs which already offer these discounts.

We must not support selling, leasing or otherwise giving away our open land to commercial solar developers whose primary incentive is profit rather than thoughtful integration of renewable energy. Most importantly, clear-cutting up to thirty acres of pristine woodlands for a commercial solar farm undercuts our town's commitment to open space.

Unfortunately, the BCSD Board's process and meetings related to this project have been less than transparent. Numerous substantive questions about the costs, risks, and environmental impact of this proposal remain unanswered.

Below we highlight some major issues that we believe the BCSD Board has failed to adequately consider:

Irreversible destruction of up to 30 acres of pristine Bedford woodland and wildlife habitat – The Brightcore solar farm would require clear-cutting up to 30 acres of woodland and natural habitat. The proposed parcel, approximately the size of 26 NFL football fields, presently contains thousands of trees. A tree survey has yet to be shared with the community, but estimates based on local environmental maps suggest that approximately 3,000-6,000 trees could be cut down. The parcel is also home to various birds and wildlife, and is surrounded by significant wetlands that feed water into the NYC reservoir system.  Moreover, some of the land was gifted to the school by a family led by Wilhelmina Waller - one of the early environmentalists in America and a leading resident of Bedford whose many land donations were given in the spirit of preservation.

This is a commercial project, NOT an educational project – The primary benefit of this project has been presented as generating approximately $525K per year income to the School District. This income is a drop in the bucket compared to the district's annual budget of about $140 million. The educational benefit described (e.g., the opportunity to teach students about clean energy) is already accomplished with the school's existing solar installation on their parking lot. Moreover, this beautiful natural habitat is currently available for "outdoor classrooms." What lesson is taught by replacing a huge forest and wildlife habitat with a commercial solar plant surrounded by protective fencing? The school is locking up land for twenty-five years that can no longer be used for educational purposes, preventing numerous other potential uses down the line (e.g., school system expansion, science/outdoor education, etc.). This is unfair for future students and families who may have true educational needs for the land.

Commercial projects set a concerning zoning precedent – A commercial solar farm of this scale is industrial in nature and is not appropriate for a residential area. The proposed parcel is surrounded by residential homes on Guard Hill Road, West Patent Road and Broad Brook Road and will likely be visible from many neighborhoods. The site is also surrounded by several horse farms, and is central to the beloved BRLA riding trails. The BCSD Board has not yet shared sight-line studies to fully assess the impact of this 30-acre commercial solar farm on the valley's viewscape.

For solar energy, BCSD has better choices – BCSD owns acres of blacktop and rooftop, which can be used for solar installations without destroying natural woodland. In fact, when placed on blacktops and roofs, the benefits of solar arrays are enhanced. When placed on a blacktop, the solar array also reduces the heat absorption of the blacktop. In contrast, when trees are clear-cut to make way for solar farms, the benefits of solar panels are reduced. You are losing trees which, along with producing oxygen,  were already reducing the carbon footprint  – in essence, "robbing Peter to pay Paul."

BCSD has not evaluated the substantial risks of Brightcore's proposal – Brightcore describes this proposal as a "one way flow of dollars to BCSD" - no fuss lease income for 25 years. BCSD is handing over control of this project to Brightcore. Twenty-five years is a long time. When the lease is finished, Brightcore may be financially unable to remediate the site. The BCSD may be left holding the financial fallout of a failed project, and need to use taxpayer money for litigation and remediation of the site. Even worse, Brightcore could sell the commercial solar farm to an out-of-state third party, leaving the BCSD without a known relationship with which to negotiate. Other risks remain: it would not be surprising if the project and technology are both obsolete long before twenty-five years. It is not clear whether the BCSD has entertained competitive proposals from solar developers other than Brightcore, nor whether the BCSD has conducted the necessary due diligence on Brightcore's track record, financial position, etc.