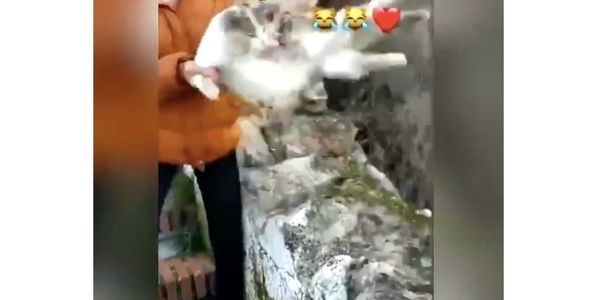 She flung a cat off of a cliff, then smiled and danced for the camera

Horrible animal abuse was filmed and posted to the internet by at least two people in Granada, Spain recently -- but despite this flaunting of violence and the solid culpability it proves, no charges have been brought.

The following description and linked video are extremely distressing -- we write this as a warning, but also to bring light to the fact that there is no reason these animal abusers should have not already faced consequences.

Sign the petition if you want to see this woman and her 'camera person' both be charged with animal cruelty and get the help that they clearly need.

The video starts with a woman, whose face is blurred, holding a cat roughly by the tender area beneath its front legs. They are on what appears to be the tops of a stone staircase on the side of a cliff, which makes it quite horrifying when she begins to swing the poor, defenseless animal back and forth. The cat's body dangles helplessly, flapping in the air as she raises it from side to side one, two, three times. At the peak of the third swing, the woman does the unthinkable -- she launches the cat high into the air, and the camera follows it so that we can finally see just how far up they are...and how far down the cat is about to fall. The cat spins in the air, its legs outstretched desperately to try and steady itself, searching for anything to grab onto. But nothing is there until it reaches the hard, cold ground tens of feet below. Sickeningly, the camera pans back to the woman, who is laughing, smiling, and dancing.

We have this video evidence because the abusers filmed it, editing it with laughing emojis and a song, and posted it for all the world to see -- like they were proud, like they thought it was funny, like they didn't care that the cat (who thankfully lived) was left injured and traumatized.

This is beyond alarming. We know that those who would harm animals, and especially those who get immense joy from it, often operate within patterns of violence. They often won't do something like this just once, and research tells us that it's not unusual for them to move onto human victims next.

Even though the video went viral and made it into the hands of local Granada Police, they have ruled out filing charges against the young woman in the video. But warnings and fines are simply not enough in this case of extreme violence.

Sign the petition if you think these two should be charged with animal cruelty, and at the very least be mandated to get the help they need so that this doesn't happen again!

Care2
She flung a cat off of a cliff, then smiled and danced for the camera
SHARETWEET