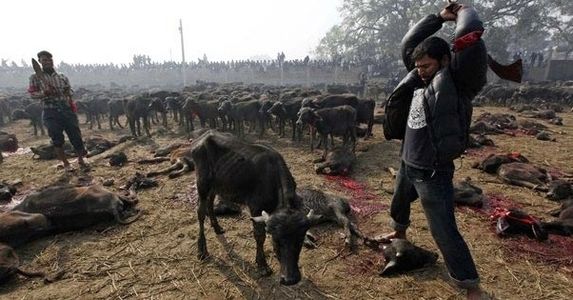 In theory, the Gadhimai festival is supposed to promote prosperity and expel evil. But in reality, this event held every five years in the village of Bariyapur in the Bara District of Nepal is a massive act of merciless animal bloodshed.

In 2009, it is estimated that a quarter of a million animals were slaughtered as on-lookers ate sugary concessions, riding a Ferris wheel and enjoying music. In 2014, 200,000 animals were crammed into pens, ran for their lives as men with knives and swords attacked them, and were eventually beheaded.

By 2015, it seemed like the luck of these animals might have changed. The Supreme Court of Nepal ruled in favor of ending live animal sacrifices at the Gadhimai festival. But apparently, this was just a suggestion. No steps for implementation were established, no actual bans were put in place, and therefore no animal lives were saved. This year, as the Gadhimai festival began without hesitation, the terrified cries of animals once again filled the air around Bariyapur.

Sign the petition and demand that the Supreme Court of Nepal impose an actual ban on live animal sacrifices.

The Gadhimai festival is a part of Nepal's rich history, and Hinduism at that. But Pramada Shah, one of the protest organisers fighting the practices of the festival, put it best when she said, "I don't think sacrifice has to be part of the Hindu religion."

Festival committee members are on record saying they have "tried not to support it" and that the festival will end "one day" but "there's no definite answer." This is cowardice! The next Gadimai festival needs to be a bloodless one.

The Supreme Court of Nepal needs to fulfill its promise to animals and their advocates, and outlaw these sacrificial killings once and for all! Sign the petition and add your voice to the fight.
Sign Petition
SHAREShare this petition with friends!TWEETEMAILEMBED
Sign Petition
See more petitions:
You have JavaScript disabled. Without it, our site might not function properly.