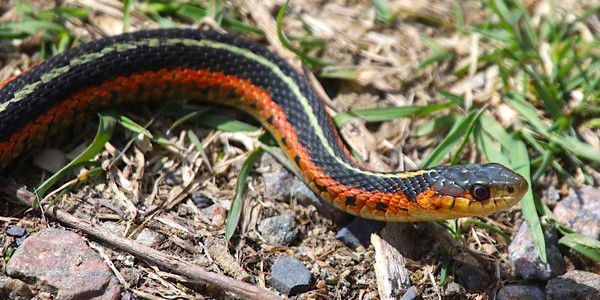 This airport kindly donated acres of its land for a threatened species, but that could change if it's not written into policy

Garter snakes are some of the most beautiful snakes on the planet, with bright colors of blue, red, and black lining their 3-foot-long bodies. They are native to the San Francisco Bay Area, where they've become one of the most threatened species of snakes due to rapid urbanization and therefore, habitat destruction.

Luckily, an unlikely hero has risen to their defense: the San Francisco airport (SFO). Across from the huge international hub, SFO has reserved a 180-acre patch of its land for approximately 1,300 of these gorgeous and vulnerable snakes.

So far, this has just been a kind gesture, but it's not written in stone. Sign the petition to thank SFO and urge it to legally commit to keeping this 180-acre patch wild forever!

The area, called "Bayshore," is privately owned -- and also privately held by the snakes and their favorite foods, the red-legged frog (also an endangered species). The public is not allowed onto this land, and staff have ensured all the right conditions are present for these snakes and frogs to thrive. It now hosts multiple ponds, long grasses, and its rocky muddy earth is untrampled by humans.

This type of unofficial refuge is hugely important for threatened species, not just because of urbanization, but also as climate change rapidly alters their usual homes. All over the world, drought and heatwaves are scorching habitats, drying up wetlands, and forcing endangered species into unsurvivable conditions.

SFO officials say they want this area "to stay the same" even as the airport grows, and that they "want to continue to provide a good stable environment for these two endangered species." This is phenomenal news. But we need to make sure SFO continues to maintain this commitment, even as staff and leadership inevitably change over time!

Let's congratulate the San Francisco airport for doing its part to protect threatened species like colorful garter snakes and red-legged frogs -- and also tell it to enshrine this commitment for posterity!
Sign Petition
SHAREShare this petition with friends!TWEETEMAILEMBED
Sign Petition
See more petitions:
You have JavaScript disabled. Without it, our site might not function properly.

Care2
This airport kindly donated acres of its land for a threatened species, but that could change if it's not written into policy
SHARETWEET