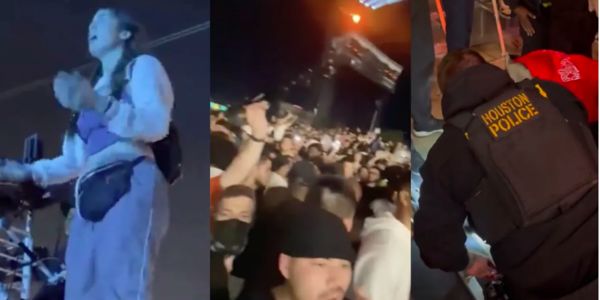 8 People Were Trampled to Death at a Music Festival; Hold Producers and Travis Scott Liable!

On Friday, November 5th, 8 people were trampled to death at a music festival called Astroworld in Houstin, Texas. Now, accounts and videos of the event point to multiple peoples' culpability in this tragedy. Crowd control is no joke, and it appears that either there was not a solid crowd control tactic, or it wasn't followed. Multiple festival staff and the performer on stage at the time, Travis Scott, seemed to have made it worse.

Sign the petition to demand the production company who put on the event, Live Nation, and the performer who egged it on and didn't stop it are held responsible!

The concert had 50,000 attendees - mostly very young people. So far, 8 people have been reported as crushed to death at the festival, though hundreds others were wounded and a few dozen needed hospital treatment. 11 were transported while in cardiac arrest. The 8 people who died were between the ages of 14-27. One 14-yr-old and one 16-yr-old died and the youngest reported who needed medical help was only 10. This was one of the deadliest music festivals in American history and we must demand answers.

Devastating first person accounts describe "human sinkholes" and "piles of bodies", one woman describes being buried beneach multiple bodies, unable to breathe or move or even see any light. They describe being so tightly packed in, they couldn't breathe as thousands of people pushed into them. They describe trying to get help from security and being ignored. Dozens of first hand accounts say they were yelling "help" to security and being told by security they couldn't stop the show.

At one point, a girl gets up on the platform of the videographer and yells "someone is dead, stop the show, someone is dead down there." He appears to hear her but doesn't use his radio to ask for help and just tells her to get down. This is all caught on tape.

Fans chanted "stop the show" when they realized a crush accident was happening, Travis Scott continued. Travis appears to have seen several unconscious bodies (maybe people who died) being removed and he just kept playing. An ambulance entered the crowd at one point and he continued to perform. Other times, he urged the fans on by saying "I want to see some rages tonight, who wants to rage?" Other artists have repeatedly stopped their shows and asked fans to part ways to let passed out people out of the crowd. He didn't do anything.

Travis is known for egging on this kind of deadly behavior at his shows. In 2019, his show in Chicago was shut down in 5 minutes and he was arrested and charged with disorderly conduct for encouraging his fans to storm the security barricades.

This concert went on for 40 minutes after the mass casualty began.

Crowds can be deadly, which is why there is usually a massive emphasis on security protocols at these big events. Live Nation is a massive festival producer, it is shocking that they failed so miserably. Apparently Live Nation has a record of 10 Occupational Safety and Health Administration (OSHA) violations, showing they've been lazy about safety at their events before. One ICU nurse who was in attendance and passed out woke up in the triage center, where she reports the medical staff did not seem to know how to check the pulse or administer proper CPR. So the third party medical contractor was also probably partially responsible.

Every single person or entity whose negligence or misconduct killed 8 young people must be held to account! Sign the petition!