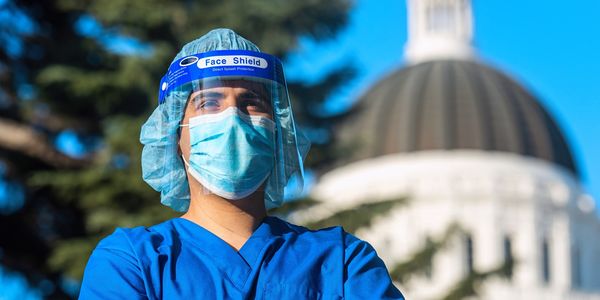 Trump made it so over 12,000 regulations that keep us healthy and safe may expire soon!

We are still in the middle of a public health crisis, the global pandemic brought on by the novel coronavirus. Trump did nothing but spread doubt and disinformation about the deadly disease that had claimed 400,000 American lives by the time he left office. And as a parting gift, he has tied up the Department of Health and Human Services (HHS), which includes the CDC and the National Institutes of Health (NIH), in ridiculous bureaucratic busy work instead of letting them focus on saving lives.

The food we eat, the medical care we receive, the drugs we are prescribed, and even the safety of the toys our children play with are all protected through a wide swath of rules and regulations set in place by the Department of Health and Human Services.

But thanks to Trump, any rule or regulation under the umbrella of HHS that is over 10 years old must be reviewed within the next 5 years. That's 12,400 different regulations, each extremely important. They include laws like HIPAA, which keeps your personal health information private, or certain food standards that mean we aren't drinking or eating poison like arsenic. And if they aren't reviewed in that timeframe? They automatically expire, disappearing without a trace and with them the standards and safety they provided. It is, of course, important to keep these rules and regulations up to date. But using such a wide brush and small timeframe to do so isn't helpful -- it is completely destabilizing.

Sign the petition and demand that Congress immediately terminate this rule through the Congressional Review Act!

The public comment period for this rule was during the largest surge of COVID-19 in the United States, meaning affected agencies like the CDC and NIH literally did not have time to oppose this dangerous rule because they were overwhelmed with patients.

These regulations and rules are not perfectly enforced -- places like Flint, Michigan haven't seen clean water running through their taps in years, for example. But we need those regulations in place so we can fight for them to be upheld in every community, including the currently under-served.

Trump and his administration spent four years weakening every system in the United States that seeks to uphold our most basic human rights, and this particular effort is a legacy to that. By finalizing this SUNSET rule, or "Securing Updated and Necessary Statutory Evaluations Timely," on the day before President Biden's inauguration, Trump set in motion 5 more years of confusion and chaos for a new administration trying to clean up his already massive mess.

Health officials are calling this SUNSET rule a "ticking time bomb." We need to ask Congress to stop it before it's too late!

Sign the petition and demand that Congress use the Congressional Review Act to throw out this last-minute rule from the Trump administration!

Care2
Trump made it so over 12,000 regulations that keep us healthy and safe may expire soon!
COMPARTIRTWEET