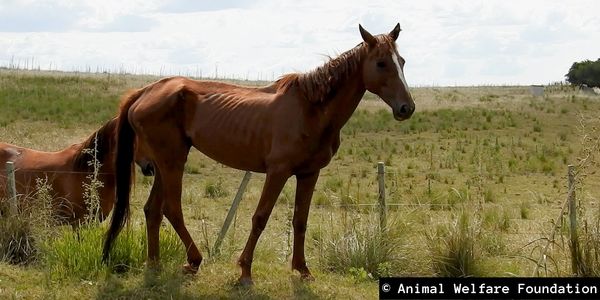 Pregnant Mares Are Suffering on Blood Farms. The EU Must Help Stop This.

"Blood farms" are just as ominous as they sound. Semi-wild mares are put through a terrifying ordeal that repeatedly impregnates them, then violently collects their blood. This is all to access a hormone – Pregnant Mare Serum Gonadotropin (PMSG) – found in the blood of pregnant mares. That blood is then processed, yielding a white powder -- PMSG -- which is then shipped around the world from mainly Argentina, Uruguay, Iceland and China to be used to increase reproduction in pigs, cattle, sheep, and goats.

In 2021, the European Parliament called for imports and production of the hormone to be banned by the European Commission, but the Commission has not yet enacted any formal ban. Blood farms are still operating in some countries and it's time for the Commission to put a stop to supporting such a violent practice!

Sign the petition to demand the European Commission finally ban imports and domestic production of PMSG!

Throughout 2021 and 2022, investigation teams from the Animal Welfare Foundation and Tierschutzbund Zürich carried out undercover observations at South American blood farms to study the latest practices. The new footage confirmed their fears: pregnant mares at blood farms are still abused and left without adequate nutrition and care. On top of that, the process includes systematically inducing abortions.

A medical doctor and horse owner in Iceland described the process as "stabbing semi-wild pregnant mares, taking their blood in extreme volumes and frequency, just to … make pigs have more pigs."

Several EU Member States – including Austria, Denmark, Poland, and the Netherlands – openly support the Parliament's call for an European Union-wide import and production ban on PMSG. The hormone is produced under extremely cruel conditions when there are plenty of alternative methods available to breeders. PMSG does not need to be used in animal breeding, since hormone-free alternatives are available.

PMSG also causes suffering for the animals in factory farming. In Europe, it is mainly used in pig breeding. The aim is to get all mother sows pregnant at the same time so that all animals are on the same grim industrial cycle: birth, fattening, slaughter. PMSG also leads to oversized litters, which result in piglets being born dead or weak and subsequently starving to death because the mother sow cannot feed them all.

Sign the petition to urge the European Commission to follow through with the call made by the European Parliament and to finally end PMSG import, production, and use in the European Union!

Care2
Pregnant Mares Are Suffering on Blood Farms. The EU Must Help Stop This.
PARTAGERTWEET