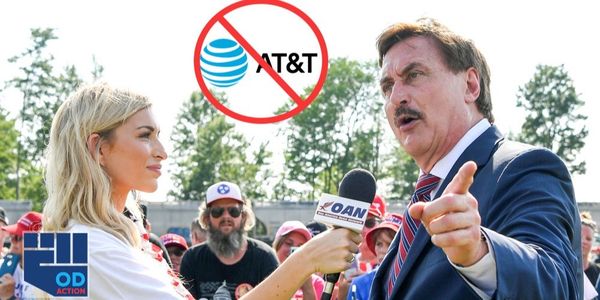 A review of court documents from Reuters uncovered that AT&T provided tens of millions in revenue to far-right, pro-trump, news network One America News. This network continues spreading coronavirus and 2020 election conspiracies to this day, and played a huge role in spreading the content that fueled the January 6th insurrection.

The world's largest communications company has no business funding an alleged $57 million to a news network that disgraced ex-President Trump openly promoted.

Sign here to call for an AT&T boycott in response to their involvement with far-right news network OAN!

OAN gained influence during their coverage of Trump's early candidacy and on, building up their viewership significantly through promoting his fraudulent behavior. Companies give their money to causes they invest in, and AT&T is investing millions in media that helped instigate a violent attempt to overthrow a democratically elected government.

AT&T signed a deal with OAN in exchange for OAN to paint the company in a positive light during broadcasts. In exchange, the company continued to turn a blind eye to their propaganda. The network's lawyer has even said that AT&T was what was still keeping the network afloat.

If AT&T has the money to fund anti-democracy conspiracy theorists, they don't need our business. Add your name to call for an AT&T boycott!