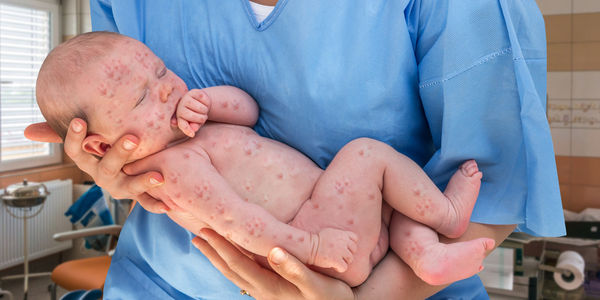 I am a mom of a two-year-old boy and just like every other parent out there, I will do anything to keep my son safe and healthy. And that means getting him vaccinated according to the Center for Disease Control and Prevention's Immunization Schedule.

As a "crunchy" mom who makes her own baby food, stays away from plastic bottles, does cloth diapering, practices "gentle parenting," and is still nursing, I've seen all of the claims about shots traumatizing our children and causing them harm. Well, you know what's more traumatizing and harmful to a baby than a few shots? Polio.

In addition to being a mom, I am a physician's wife. I know exactly what happens when a child is not immunized. And it infuriates me that billboards have popped up all along the east coast, including in Pennsylvania where I live, that use scare tactics to turn people against life-saving vaccines. The innaccurate anti-vaccination movement has become a huge health threat to children everywhere. That is why I am asking billboard companies to take down this life-threatening message right now.

Please sign my petition to help protect children from anti-vaccine scare tactics that could lead to mass outbreaks of polio and smallpox.

Before vaccines were widely available in the U.S., horrifying diseases like polio and smallpox killed and disfigured millions of people -- many of whom were children. But now we can immunize our children against some of the worst afflictions known to mankind. We don't have to keep our children isolated indoors so they don't contract smallpox. We can spare them a life spent in an iron lung. We do not have to fear measles wiping out our entire family within a week.

But vaccines work best if herd immunity is in effect. This means that most people must be vaccinated in order to stop the spread of disease. When the herd immunity standards are not met, the ones who suffer are the new babies, the children fighting cancer and other diseases that weaken the immune system, and the elderly. So choosing not to immunize your own child not only puts their life in danger, it also endangers countless others.

Skepticism of vaccines can be traced back to a falsified scientific study that said vaccines caused autism. The study was quickly exposed as a fraud, but mistrust of vaccines had already taken root. Since then, there has been a growth of anti-vaccination groups that use new parents' fears to make them believe conspiracy theories. Multiple scientific studies have proven that there is absolutely no link between autism and vaccines.

We have the ability to vaccinate against some of the worst diseases humankind has known. We cannot let a small group of people spreading lies based on fear put our children and our community at risk. The malicious billboards use a tragic story of a baby dying of SIDS to turn parents away from vaccines. But there is absolutely no evidence that vaccines cause SIDS or will lead to a child's death.  However, smallpox, polio, and measles definitely kill children.

That is why I am asking the billboard companies hosting these dangerous lies to take them down right away. Please join me in protecting my son and yours by signing today.
signer
PARTAGERpartager sur FacebookTWEETE-MAILINCRUSTER
signer
Voir plus de pétitions:
Vous avez désactivé JavaScript sur votre navigateur. Sans JavaScript, il se peut que notre site Internet ne fonctionne pas correctement.