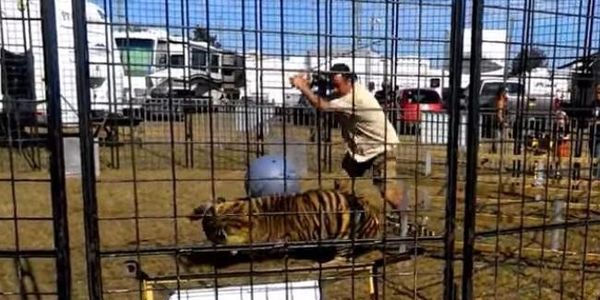 During a performance of the Pages White Tiger Show at a Florida fair, trainer Vincenta Pages, the show's co-owner, fell down. A Bengal tiger named Ghandi began dragging Pages by her leg.

Pages whipped Ghandi's face. Her fiancé and the show's co-owner, David Donner, ran to her and repeatedly struck Ghandi with a rod until the tiger let go.

The disturbing incident was captured on video by one of several schoolchildren who were watching the show on a field trip.

Pages, a former trainer with Ringling Bros. Circus, claims her show is "educational" and based on the tigers' natural behavior. But in the show, seven tigers do various tricks like standing on their hind legs, rolling on their backs and performing Michael Jackson's "moonwalk" – none of which are natural behaviors for wild animals.

For the safety of humans and animals, these tigers should not be forced to perform, and should not be subjected to cruel punishment when do what comes naturally.

Please sign and share this petition telling Pages and Donnert to stop exploiting tigers in the Pages White Tiger Show and release them to a sanctuary.

I am writing to you because I was disturbed by the video of Vincenta Pages being bitten by a tiger and the tiger's subsequent beating by David Donner, all in front of schoolchildren on a field trip to see the Pages White Tiger Show.

While the show is said to be educational, it is not natural for tigers to perform tricks or to be whipped when they don't perform as they're supposed to.

For your safety and for the welfare of your tigers, I urge you to release them to a sanctuary.