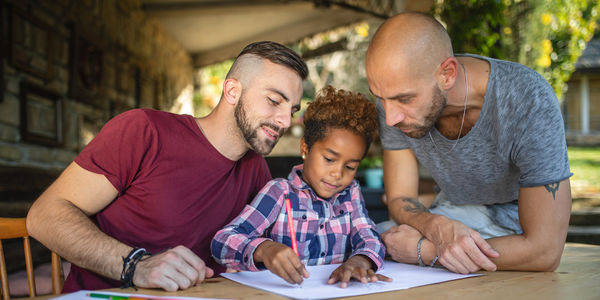 There Are Nearly 450,000 Children in Foster Care, Yet These States Won't Let LGBTQ+ Families Adopt Them

On any given day, there are around 450,000 children in the U.S. foster care system. The average age of these children is 8 years old, and they can spend from two to five years, some never leave it. When a foster child turns 18 they usually "age out" of the system altogether. This means they are officially excluded from consideration for adoption as they have reached the age of emancipation. While all foster children are an at-risk population, those that leave the system without a forever family, are possibly the most in danger of falling between societal cracks. According to Children's Rights.org, they have a "higher likelihood than youth in the general population to experience homelessness, unemployment, and incarceration as adults."

Sign to make sure every foster child can find a home.

Taking all these troubling facts into consideration, you would think states would be working hard to find as many, willing and welcoming people to foster and adopt America's children. But that isn't always the case, especially when it comes to placing children with members of the LGBTQ+ community.

In fact, 21 states have no protections against LGBTQ+ discrimination regarding adoption or fostering. Eleven of those states have explicit clauses in their laws that allow "state-licensed child welfare agencies to refuse to place and provide services to children. These laws take LGBTQ+ parents out of the running, even though, statistics show they are up to "seven times more likely to foster and adopt... just as educated as, and have access to the same economic resources as other adoptive parents."

Thankfully, the U.S. House of Representatives has introduced a bipartisan bill that could block discrimination in the foster care system in its tracks. The Every Child Deserves a Family Act not only prohibits discrimination of eligible LGBTQ+ parents, but also outlines special protections for LGBTQ+ youth in foster care who are overrepresented in the system.

A version of this bill was introduced in 2013 but was never put into effect. This year, we have a chance to actually make it law.

Care2
There Are Nearly 450,000 Children in Foster Care, Yet These States Won't Let LGBTQ+ Families Adopt Them
PARTAGERTWEET