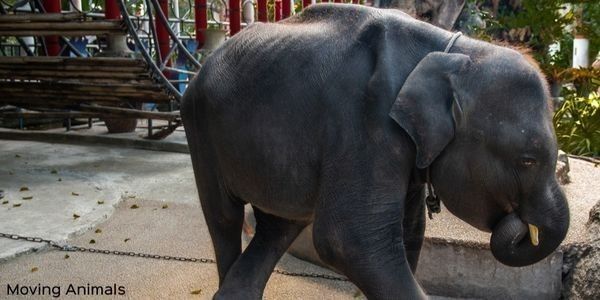 In April 2019, the world was horrified by footage and photographs, released by Moving Animals, which showed a "skeletal" baby elephant forced to "rave" to music and perform tricks for tourists at Phuket Zoo in Thailand.

Moved by the baby elephant's plight, Moving Animals nicknamed him "Dumbo" and started a campaign for his freedom. Over 200,000 compassionate people from around the world called for his release to a sanctuary.

But, in a tragic conclusion to the baby elephant's heartbreaking story, "Dumbo" has died at just three years old.

After public pressure forced the zoo to seek veterinary treatment for "Dumbo", it was revealed that he had been suffering from a digestive tract infection for months, which gave him constant diarrhea and made him incredibly weak.

Whilst under the so-called "care" and "treatment" of Phuket Zoo, "Dumbo" got stuck in a puddle of mud. He was so weak, that his back legs snapped beneath him as he tried to free himself.

Despite this, the zoo did not even realise his legs were broken for three days. Finally, the baby elephant was taken to an elephant hospital. He died just three days later.

Horrifically, "Dumbo's" story is not an isolated one, as zoos and wildlife attractions across Thailand are exploiting animals every day.

Phuket Zoo continues to make many animals perform, including monkeys, crocodiles, and other elephants. They're also legally allowed to purchase another baby elephant for their shows.

We must stop this from happening - it may be too late to save baby "Dumbo", but it is not too late to stop the zoo from hurting other animals.

Please sign and share the petition calling for Phuket Zoo to be shut down immediately. Together, we can help stop cruel wildlife attractions in Thailand for good. Thank you.

For more images, information, and updates on the campaign, please visit Moving Animals.