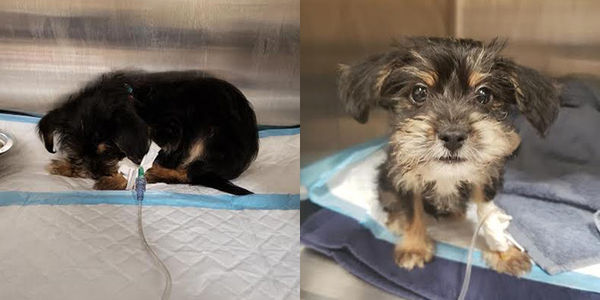 Stand Up Against Puppy Mills!

Augie, a tiny, 8-week-old puppy is the face of irresponsible breeding. Animal Haven received an urgent call from a local vet's office who had taken in a very, very sick puppy. He was experiencing vomiting, diarrhea and had no interest in food. The family who purchased this puppy from a "breeder" had relinquished him to the vet when they realized his health issues and resulting vet bills were more than they could handle.

Puppy mills and backyard breeders prioritize profits over the health and wellbeing of the animals. These unscrupulous operations are irresponsible and bad for both the parent animals and the resulting puppies.

Augie's pain and fear were the direct result of humans prioritizing financial gain over the welfare of animals. Sadly, this is the reality that so many dogs suffer each year. But together we can end this cruelty!

Luckily for Augie, his health is improving and he will be able to live a normal, happy life. But many dogs from puppy mills are not so lucky. Some will live with lifelong health complications, while others never make it out alive due to neglect, malnutrition and a lack of medical care.

Show your support for Augie and so many other innocent dogs like him. Add your name to our petition and stand up against puppy mills and unethical breeding operations.