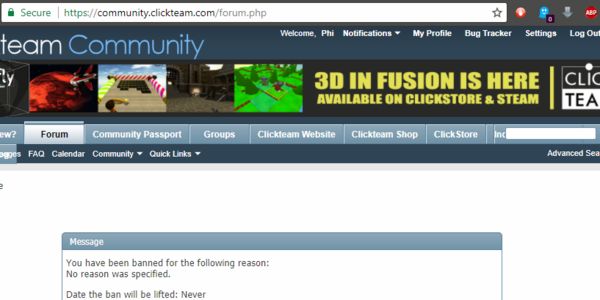 Due to overstepping by an admin who has similarly revoked two others' privileges without due cause - including banning two active users - Phi was also kicked EDIT: banned from the Clickteam server and his mini-mod status removed. The ban extends to both forums and the Discord.

The sole cause is impatience on the part of the admin, as the admin demanded a favour of Phi "or else lose mini-mod", yet when Phi was responding, he was cut off and booted from the server.

An attempt to rectify things privately, was flatly refused and no fault admitted on part of the admin, despite the fact it required solely a mutual apology from both parties.

As Clickteam seem disinterested in the admin's overstepping of decent ethical boundaries, having now allowed the admin to restrict THREE users without violation of rules on any part of those three, Phi is now turning to the userbase he has served to make their voice heard.

Due to the abusive and manipulative nature of the admin's behaviour, if Clickteam continue to ignore it or look the other way, an affiliation with Clickteam can no longer be possible. To that end, the services from Darkwire including support for CT products, Lacewing hosting, Fusion extension listing, extension development help, code critique, and public C++ extension maintenance may be halted indefinitely.

Phi has re-enabled the services of his own accord to try and not let anyone else suffer in this mess.

To date, Phi has provided all those services for free, for several years; he is the only user on Clickteam Discord to even provide extension development help so far.

EDIT: Since the posting of this petition, Phi has been banned from Clickteam's official Discord entirely, as well as the forums, despite the fact this cuts off any support he could give for his extensions.

Those who want to take further action against this action, please talk to other Clickteam users privately about this to raise awareness, and we invite you to join the new Discord for more information and support.

Your signature will mean a lot, so thank you.