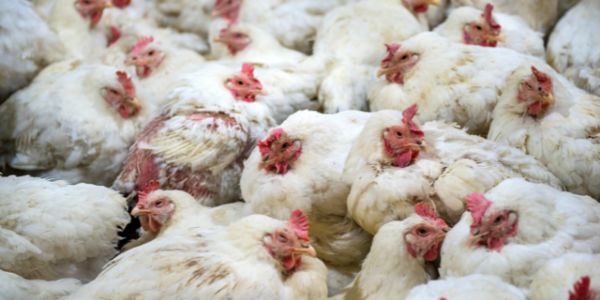 Animals are being killed by gassing, suffocation by foam, and worst of all, ventilation shutdown plus (VSD+) - the practice of sealing all ventilation points and adding heat to suffocate animals. The American Veterinary Medical Association (AVMA) depopulation guidelines permit the use of this cruel practice.

VSD+ kills animals by using heat, humidity and carbon dioxide paired with total ventilation shutdown. Although these additional components can speed up animal deaths, the resulting death is agonizing. Heat combined with ventilation shutdown essentially bakes animals alive. It forces them into heat stroke or cardiac arrest before suffocation. The AVMA poultry guidelines suggest using VSD+ in circumstances when heat can be kept at deadly temperatures for a minimum of three hours.

The AVMA may be slow to change its policies, but we know that many veterinarians do not support this method of killing animals. In 2020 alone, nearly 3,000 veterinary professionals demanded a revision to this outdated and dangerous policy. Will you help?

Millions of birds are counting on us to protect them. Join us in asking the AVMA to update their guidelines and reject using VSD or VSD+.
lire la lettre de la pétition ▾

To the American Veterinary Medical Association,

I am writing to you today to request your urgent action on a serious issue. In the wake of the recent Avian Influenza outbreak in the United States, mass killing is already being carried out by farms across the country. These sad events are only bound to increase. As someone who is deeply concerned with animal welfare, I was shocked to learn that AVMA guidelines permit the use of Ventilation Shutdown + (VSD+) in "constrained circumstances".

While I appreciate the fact that AVMA does not recommend the use of VSD alone, I fear this guideline is not enough. VSD+ involves the incorporation of components such as heat, humidity and carbon dioxide paired with total ventilation shutdown. While the additional components can speed up animal deaths, the resulting death is still likely to be agonizing. Heat combined with ventilation shutdown essentially bakes animals alive, forcing them into heat stroke or cardiac arrest before suffocation.

The AVMA poultry guidelines suggest that VSD+ be used in circumstances in which heat can be kept at deadly temperatures for a minimum of three hours.

In pigs, the goal of a 95% mortality rate in one hour is recommended. Even in the most ideal circumstances, these deaths are filled with suffering. I found the references to failed attempts to be devastatingly inhumane. The AVMA guidelines themselves reference a case study involving pigs that experienced a ventilation failure event- 100% mortality was not achieved even after 16 hours.

Considering that AVMA representatives are not required to be present during the practice of VSD+, failed or botched attempts cannot be ruled out. Advertising this practice as permissible, even in constrained circumstances, is irresponsible and leads to immense suffering.

The AVMA Veterinarian's Oath mandates that veterinary knowledge and advice be used "for the benefit of society through the protection of animal health and welfare, the prevention and relief of animal suffering, the conservation of animal resources, the promotion of public health, and the advancement of medical knowledge." Any circumstances involving the painful practice of VSD or VSD+ do not reflect these values. The fact that the species in question are not raised as companion animals and are kept in dense numbers does not justify their suffering. In 2020, nearly 3,000 veterinary professionals expressed their opposition to this policy. The number continues to grow every day.

With urgency, I ask you to consider an immediate change in policy. While I understand that the AVMA is not a regulatory organization, its power for driving change in the animal husbandry field is high. If even a single animal was spared from this unconscionable fate as a result of a policy change, the efforts would be worth it. Thank you for your time and attention to this issue.