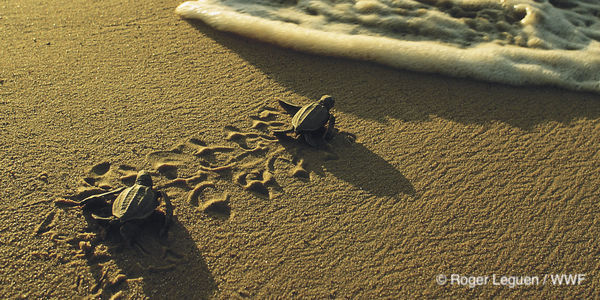 In the first 100 days of the Biden administration, we've seen bold commitments and steps toward a future that protects the health of our people, our economy, and our planet. As the President and administration cross the 100-day threshold, they have made clear that they are determined to tackle the three inter-related crises of an ongoing pandemic, worsening climate change, and the unsustainable loss of nature and global biodiversity.

Now we need them to keep going and ensure these stay top priorities. There is no doubt that our broken relationship with nature is at the heart of all these crises.

Of critical importance, the Administration should continue to make clear to the rest of the world, through its commitments and its actions, that the US will remain a global leader on efforts to stop climate change, protect nature, and promote a more secure, sustainable, and prosperous future. At the Leaders' Climate Summit, the Biden Administration made clear it is putting climate change center stage in efforts to engage the world. It should do the same for its effort to halt the loss of nature and biodiversity, ensuring these also have a central role in our US foreign policy and foreign assistance going forward.

Join us and ask President Biden to keep these priorities at the heart of his Administration, in order to protect the health of people, the economy, and our planet.
lire la lettre de la pétition ▾
Dear President Biden and Vice President Harris,

In your first 100 days as the new President and Vice President of the United States, you and your Administration have demonstrated determination to tackle three intertwined and existential crises that are confronting us: climate change, the global loss of nature, and the need to respond to the current pandemic and prevent future ones. During your time in office, you have an opportunity to help reset our relationship with nature in order to address all these challenges. I encourage you to fully embrace the challenge and the opportunity to guide our nation on a more sustainable, more just, and more equitable path.

As a central part of your agenda for the next four years, I ask you to continue prioritizing the following issues and actions:

Building Back Better & Preventing Future Pandemics
Champion an ambitious future-focused recovery and stimulus package that ensures we build back better, both in the US and globally. In addition to addressing the immediate health and economic crises, this means designing recovery investments to cut carbon emissions, speed America's transition to clean and renewable energy, and build the resilience of communities and nature to climate change. It also means making significant new investments internationally to prevent future pandemics by addressing the root causes of the spillover of zoonotic pathogens from wildlife to humans via the wildlife trade and the destruction and conversion of forests and other natural habitats.

Climate Change
Having made good on your promise to rejoin the Paris Agreement on Day 1, set new ambitious targets for US emissions reductions, and issued executive actions to guide US government action on climate change, now do all you can to translate these targets and commitments into transformative action at all levels of government and society and drive global ambition in advance of COP26 later this year.

Ensure EPA puts in place new carbon pollution and GHG standards for power plants and vehicles, in line with these ambitious new targets and commitments.

The Global Biodiversity Crisis
Make efforts to halt the loss of nature and the decline of ecological systems globally a top priority, alongside efforts to address climate change, and strongly integrate these efforts into US foreign policy, foreign assistance, and national security policy, including through an Executive Order creating a National Biodiversity Strategy to direct and guide the US government response to this challenge.

Significantly ramp up funding for global conservation and efforts to halt nature loss, bilaterally and through the Global Environment Facility, and put the US on track to double its investments in these efforts over the course of the Administration's first term.

Ensure agencies rescind and revise damaging regulations and guidance adopted during the Trump Administration with respect to the Endangered Species Act, the Migratory Bird Treaty Act, the National Environmental Policy Act, and the use of science in federal decision-making.

"30 x 30"
Lead a collaborative process, including with communities, Indigenous Peoples, and the private sector, to achieve the goal of conserving 30% of US new protected areas as well as incentives for conservation and sustainable management of working and private lands and waters.

Reflect these commitments in relevant domestic policies, such as the Farm Bill and decisions around the leasing of federal lands.

In addition to your early action to temporarily halt lease sales in the Arctic National Wildlife Refuge, we urge you to permanently protect the Arctic Refuge and Arctic Ocean from oil and gas exploration and ensure a veto of the development of Pebble Mine.

Plastic Pollution
Support comprehensive efforts to phase out the use of unnecessary plastics and other materials and establish the standards, incentives, and awareness to create a circular economy, through legislative and administrative action.

Environmental Justice
Support policies to rectify the historical inequities and disadvantages that have led low-income communities, communities of color, and tribes and indigenous communities to be disproportionately affected by pollution and environmental degradation, including deep consultation with these groups and prioritizing investments in these communities to build resiliency and green infrastructure and promoting clean air, clean water, clean energy, and sustainable food systems.